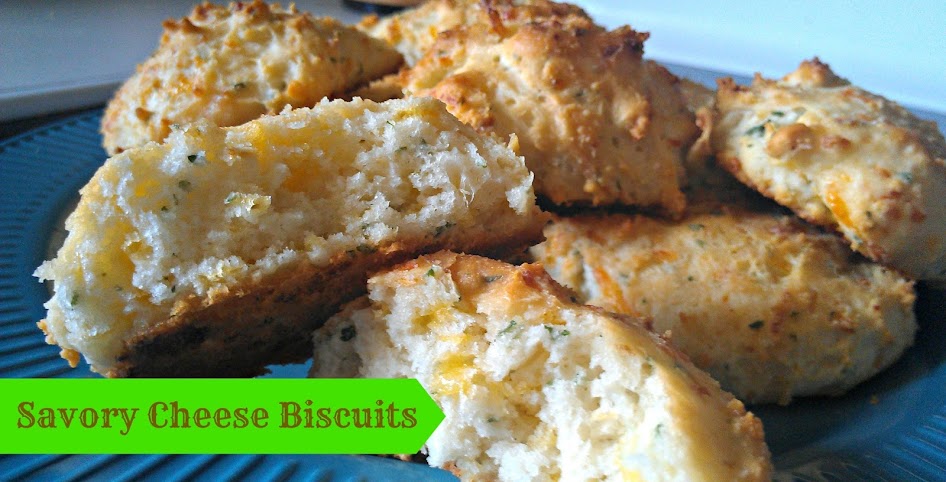 Rolls are one of my favorite things about going out to eat at a restaurant.  Almost all of them bring you a basket of rolls or biscuits, loaves of bread, or bread sticks.  Some have great flavored butters or provide you with dipping sauces.  No matter the form or the accouterments  it’s always good.

We do try and serve a few of our own bread sides with our meals at home, too.  Usually it’s heat-and-serve rolls or garlic bread, homemade cornbread, or on occasion a homemade loaf of bread.  One thing I’ve wanted to try that I hadn’t so far, though, were cheese biscuits.  They are a family-favorite when we go out to eat (Ashley says she could live on them) and I hoped that any homemade variety that I tried would be similar in taste.

Then I found this Savory Cheese Biscuit recipe in the new “Weeknight Dinners” cookbook from Gooseberry Patch.  The recipe was submitted to the cookbook by J.C. Schmeltekopf and they are extremely fast and easy to make.  They’re also really good.  Hubby had one and said, “Hey that’s good”.  Five minutes later he was saying, “Hey that’s really good” and kept commenting on them throughout the night.  Always a good sign!

5.0 from 4 reviews
Print
Savory Cheese Biscuits
Ingredients
Instructions
3.2.1230
The original recipe suggests rolling the dough out, cutting them with a round biscuit cutter, and then placing them in a greased muffin tin to bake.  I’m sure they’re great like that but I prefer mine to be a bit more rustic so I just dropped them by the spoonful.  It also calls for 1/4 cup of melted butter and 1/4 teaspoon of garlic powder but I had a lot of butter leftover so I halved it for you.  You can certainly make the original amount if you’d like.

I’d love to give you a copy of “Weeknight Dinners” so that you can try some of the other yummy recipes it contains.  I know the next one on my list to try is the Chicken Tetrazzini.  Giveaway closed.

What is your favorite weeknight meal to serve?

I received a copy of the cookbook in order to facilitate my review.  All opinions, as always, are 100% that of myself and my family.