This shop and my Disney Frozen potty chart have been compensated by Collective Bias, Inc. and its advertiser. All opinions are mine alone. #PUBigKid #CollectiveBias

Bubbles has been “in the process” of potty training for awhile now.  We’ve had a lot of success in certain areas; she’s been nighttime potty trained for probably a year and always goes potty first thing in the morning.  It’s the rest of the day where we have had a few challenges. 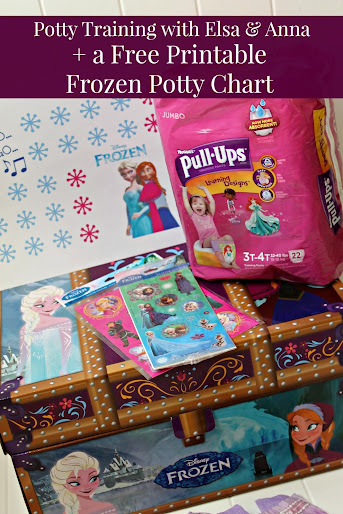 The main challenge being that Bubbles doesn’t like to miss out on anything.  If we leave the room to go potty, we might miss the family of rabbits in the backyard or her favorite song might come on.  Or worse still in her mind, she’d have to miss a few minutes of playtime.  None of that is worth taking two minutes for a potty break. END_OF_DOCUMENT_TOKEN_TO_BE_REPLACED

This is a sponsored post written by me on behalf of Pull-Ups® Training Pants.

There have been a number of times over the past few months that I thought we were finally ready to start potty training.  Bubbles would take an interest and try to go when prompted, and sometimes even of her own volition, but it wasn’t ever anything that was at the top of the list.  It came down to the fact that my curious little girl was afraid she’d miss out on something fun and was too interested in the book/toy/whatever she was doing at the moment to stop for a potty break.

I was surprised, because everyone always talks about how girls potty train so early and so easily.  I didn’t really want to press the issue with her because I didn’t want to turn it into something negative that she was going to be even more against trying (did I mention that my curious toddler also has quite the stubborn streak?).  The time has officially come for us to start, though.  Bubbles looked at me the other day and said, “No more diapers, Mama.  I’m a big girl.”  No arguments from me!

So we picked out some big girl undies and have them as our goal for after Christmas.  In the meantime, we’re going to be using Pull-Ups® Training Pants.  There are a lot of events and excitement over the next few days and we decided that Pull-Ups® were the best option to help us build the bridge between diapers and undies while minimizing accidents and the need for a change of clothes. END_OF_DOCUMENT_TOKEN_TO_BE_REPLACED

When do you know it’s time to start potty training?

I’m quickly learning that while cliché it’s true: kids grow up in the blink of an eye.  Every time I turn around, Bubbles has mastered some new skill or learned something new that surprises me.  Just the other day she was in the bathroom with me while I was getting ready and instead of wedging her finger between the crack of the door and the frame to pry it open, she stretched up and pulled it open using the knob.  She turned and looked at me as if to say “Yep, I’m a big girl now.”

Last week she also decided she was a big girl and didn’t want to wear a silly diaper any more.  She’ll wiggle out of her shorts and then come up to my husband or I, tugging at her diaper.  We explained that she had to wear a diaper until she could learn to go potty, and she immediately tore down the hallway until she reached the bathroom and stood there pointing at the door like “well, then, let’s do this.”

So we took her in, held her on the potty and let her sit there for a minute.  She didn’t actually go, but she had a very proud look on her face, and then turned around, flushed the toilet, and applauded for herself.  Over the next couple of days, she’d occasionally do the same thing.  After that, she kind of seemed to get bored with it, so we dropped it for the moment.  We don’t want to push her into something she’s not ready for, and then turn it into a negative instead of a positive.

Over the past couple of days she’s back to trying to pull her diaper off, however, so I think we’re going to order her a potty seat and start taking her in the bathroom in the morning when she gets up and see what happens.  Most nights she wakes up with a dry diaper, so I think that’s a good sign?  I know girls generally train younger than boys do, but I’m still not sure if 18 months is too young to start.

I’d love to get some feedback from you all!  What age did your child start potty training, and do you have any potty training advice to share?