When do you know it’s time to start potty training?

I’m quickly learning that while cliché it’s true: kids grow up in the blink of an eye.  Every time I turn around, Bubbles has mastered some new skill or learned something new that surprises me.  Just the other day she was in the bathroom with me while I was getting ready and instead of wedging her finger between the crack of the door and the frame to pry it open, she stretched up and pulled it open using the knob.  She turned and looked at me as if to say “Yep, I’m a big girl now.”

Last week she also decided she was a big girl and didn’t want to wear a silly diaper any more.  She’ll wiggle out of her shorts and then come up to my husband or I, tugging at her diaper.  We explained that she had to wear a diaper until she could learn to go potty, and she immediately tore down the hallway until she reached the bathroom and stood there pointing at the door like “well, then, let’s do this.”

So we took her in, held her on the potty and let her sit there for a minute.  She didn’t actually go, but she had a very proud look on her face, and then turned around, flushed the toilet, and applauded for herself.  Over the next couple of days, she’d occasionally do the same thing.  After that, she kind of seemed to get bored with it, so we dropped it for the moment.  We don’t want to push her into something she’s not ready for, and then turn it into a negative instead of a positive.

Over the past couple of days she’s back to trying to pull her diaper off, however, so I think we’re going to order her a potty seat and start taking her in the bathroom in the morning when she gets up and see what happens.  Most nights she wakes up with a dry diaper, so I think that’s a good sign?  I know girls generally train younger than boys do, but I’m still not sure if 18 months is too young to start.

I’d love to get some feedback from you all!  What age did your child start potty training, and do you have any potty training advice to share?

There’s a cute concept in the world of pajamas and it comes courtesy of a company called Little Toader.  They have designed Storybook PJs, a themed set that includes a book and a pair of PJs.

Little Toader is owned run by husband and wife team Lori and Michael and is located in Florida.  With three children of their own (and one on the way) they often found themselves saying “they should make…”  And so they decided to do just that.  They’ve created a line of safe, unique and fun items for babies and kids.

I had the pleasure of meeting the Little Toader folks at the ABC Kids Expo this year and they were such a sweet couple.  You can tell they have passion around their products and their work and it was infectious.  They also produce the Appeteether which will make your little one giggle.

The Storybook PJs come with a book – Adventures in Dreams – that is meant to be read while the pajamas are worn.  The images used in the book correspond to the images printed on the PJs.  So as you read the book they can search for the images on their jammies to make it more interactive. 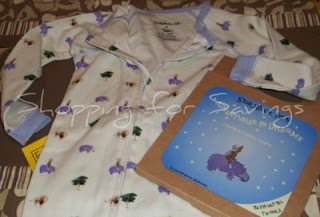 The PJs are unisex and are 100% cotton with a snug-fit design for safety.  They’re really cute and the water color effect gives them kind of a soft, brushed look.  I would encourage you to order the next size up, though.  We have the 6-12 month size and Baby C. fell in the weight and height range indicated on the size chart, but they were a little small for her.

One reader will win a set of Storybook PJs in size 12-18 months or 18 months.  Giveaway closed.

I received a product in order to facilitate my review.  No other compensation was received and all opinions are 100% mine and my family’s.

Baby C. has proven to be a bit picky when it comes to eating her vegetables (much like a lot of kids, I’m sure).  She loves sweet potatoes and will tolerate peas and a couple of vegetable “blends”, but had pretty much refused to eat green beans, carrots, squash, etc. no matter how many different times we tried to introduce them.

No more!  This past week we received a sample box of Baby Gourmet baby food pouches.  The flavor combinations are really unique – not your standard jar of bananas – and I was worried that Baby C. wouldn’t give them a chance.  She ended up loving them, though! 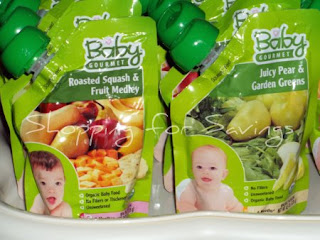