Last year I attended the ABC Kids Expo here in Louisville and you may remember that I was introduced to a number of excellent companies, interesting products, and lovely people.  I wrote about quite a few of those interactions, including the one I had with the folks at Pipila.  Pipila, for those who may not have been readers at the time, is the world’s first portable UV pacifier sterilizer.  It safely eliminates up to 99.9% of germs in just three minutes – and for busy parents, that three minute cycle is an important feature.

END_OF_DOCUMENT_TOKEN_TO_BE_REPLACED

2011 Holiday Gift Guide – Stocking Stuffer Suggestions
(Be sure to check out all the other great Gift Guide items and giveaways here.)
In addition to the cute Storybook PJs I shared with you earlier, Little Toader also produces the Appeteether.  These “Appetizer Teethers” are a fun and unique choice of teether for your little one. 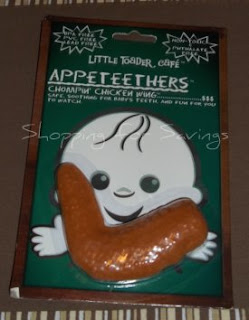 The Appeteethers currently come in two varieties (though a little birdie tells me additional selections may soon be on the way): Chompin’ Chicken Wing and Baby-Q Ribs.  It’s kind of funny to watch your little one chomping away on their own BBQ rib. 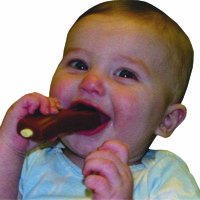 The teethers were designed to me more than humorous –  they’re made to reduce teething discomfort.  All Little Toader teething toys are nontoxic, BPA-free, lead free, PVC free, and Phthalate free.  Each batch of Appeteethers is tested by an independent third party organization to ensure the highest level of safety and comply with all Consumer Product Safety Commission requirements.  They also have varying colors and textures to stimulate baby’s senses.
Baby C. loves hers; she chews on it all day.  It’s held up excellently, even now that she is sporting one very sharp little tooth!
Where to Buy:
You can purchase Appeteethers from the Little Toader website.  Regular retail is $14.99, but until December 31, 2011 everything is at least 30% off, so they are $9.99.  They also come in a sampler pack with one of each for $18.89 (reg. $26.99).
Want to Win?
One reader will win their choice of a Chicken Wing or Rib teether.  To enter click here and fill out the Rafflecopter form at the bottom of the post.

This post is the second in a series of reviews for some of our favorite baby products so far.

After the swing, one of the next things we picked out was an activity mat.  While being a less costly investment, this ended up being a harder task than choosing the swing, mainly because there are just so many mats out there to pick from.

I wanted something that was bright and interesting for Baby C. and that would keep her engaged without being garishly colorful.  I also wanted it to be able to “grow” with her; items to capture her attention as a newborn and toys to stimulate her as an infant into toddler-hood.
We solicited recommendations from friends, asked for suggestions on Twitter and did a lot of web searching for reviews.  After about a week we settled on the Fisher-Price Rainforest Melodies and Lights Deluxe Gym

and I’m glad we did; we have been so pleased with our purchase. 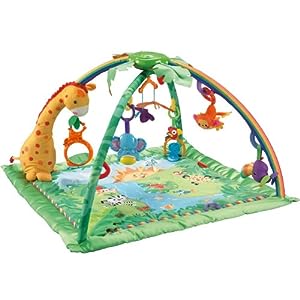 Here are some of my favorite features:
The colors and print.  They are bright, fun and cheerful – but not in a clown-closet-just-exploded-all-over-the-place or “cutesy” kind of way.  And as Baby C. got older and could roll over onto her stomach she was intrigued by the colors and print on the mat part.
The toys.  The gym comes with “spinning” butterflies, a shiny mirror, a crinkly leaf attached to the mat, and movable activity toys that include an elephant spinner with rattling beads, a soft monkey, a soft toucan with a bell inside, and a parrot with a spinning paddle.  Before Baby C. was old enough to actually play with any of the toys she loved to stare at the (orange) monkey.  Once she was old enough to play with the toys the elephant was her clear favorite.  She didn’t play with the parrot and toucan as much, though she did like to kick them to hear the jingle and see the paddle twirl.  She also enjoyed the crinkle leaf once she could reach out for it while on her tummy.  There are multiple loops of varying height so you can rotate the toys to new places to keep baby interested.
The sound options.  This mat has both lights and sound which play in three modes: continuous music (20 minutes), continuous rainforest sounds (20 minutes, or activity mode.  In the activity mode, when baby makes the frame or one of the toys move the lights and music come on for 8-12 seconds.  Once Baby C. discovered that she could “make it work” she was thrilled.  She’d swat the elephant until the lights and sound turned on, would watch the show, and then do it again when it stopped.
Areas for improvement:
The “spinning” butterflies.  The butterflies don’t spin.  Well, more accurately, they don’t spin unless you spin them yourself.  Baby C. loved looking at them and eventually got old enough to reach them to swat, but never made them spin.  They feel like they should be motorized (it does use batteries for the lights and sound), but since they’re not I think that instead of the mobile-type thing that’s used they should attach them with individual strings so that a swat could make them rock.  Definitely keep them (they’re adorable) but maybe rethink them a little.
The parrot paddle.  Cute toy but you have to put it on the highest hoops and even then it hangs pretty low to the ground.  This is fine for awhile but once Baby C. got to be three months or so playing with it meant that she was going to smack herself in the face with it.  Maybe they could make the paddle detachable and include a different attachment for older babies.  I’m not sure, I just know that it became unusable after awhile.
The battery life on this gym is also good; we haven’t had to replace them once in almost seven months, and Baby C. uses it a lot.  As you can see below, she was still loving it a couple of months ago when she wanted to start playing with it while standing up (with help from Grampie). 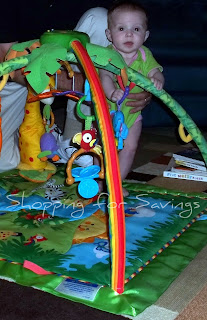 The Fisher-Price Rainforest Melodies and Lights Deluxe Gym is available from most major retailers but the cheapest I’ve seen it (by $8-$25 at the 8 websites I checked) is on Amazon for $46.50 with free Super Saver Shipping

.  (Target doesn’t seem to carry it, though they do have the matching mobile.)

Final words: I would definitely recommend this mat to anyone with an infant (or looking for a baby shower gift).

I received no product or compensation for this post; we just love this swing and I wanted to share it with you.

Since Baby C. was born our house has become sort of overrun by baby things.  And by sort of I mean that she may actually have more furniture and “stuff” than I had in my first and second apartments combined.  I’ve been meaning to share the reviews of some of the items we’ve found most useful – and the ones most loved by her.

So over the next week or so I’ll be sharing “Baby C.’s Favorite Things” – a guide to some of the best products to consider if you’re expecting or looking to purchase a baby gift.  None of these posts are sponsored nor did I receive any of the items for free.  They’re just great products I think you’d love, too.