Bubbles knew of Sleeping Beauty from some of her books but had never watched the movie.  I was offered a review copy so when it arrived, we sat down that night to get her caught up on the story of Aurora, Maleficent, Prince Phillip and the sweet fairies Flora, Fauna, and Merryweather.  Bubbles was familiar with them more than any of the characters, as they are also characters in the Sofia the First TV show.

In this classic fairytale the evil Maleficent cursing the beautiful baby Aurora, saying that though the baby “will grow in grace and beauty” that “before the sun sets on her sixteenth birthday, she will prick her finger on the spindle of a spinning wheel and die.”  Merryweather uses her magic to change the curse from die to deathlike sleep, one which can only be woken by true love’s kiss.  The fairies then change her name to Briar Rose and spirit her away to live in the forest to protect her from that fate.

Years later as she gathers berries on her 16th birthday, her singing attracts Prince Phillip and they fall in love.  Shortly thereafter through Maleficent’s trickery, Aurora is lured to touch a spinning wheel and the curse is fulfilled.  Armed with the Sword of Truth and the Shield of Virtue, Prince Phillip goes to rescue Aurora by killing Maleficent who has turned into a dragon.

There are some great features on the Diamond Edition, too, like the feature “Once Upon a Parade”.  Join Sarah Hyland from ABC’s “Modern Family” as she tells us the tale of Walt Disney World’s new Festival Of Fantasy Parade.  This magical “in world” short film goes behind the scenes of the new parade and shows how the residents and characters of Fantasyland created this parade to tell their stories.

Be sure to pick up your copy of Disney’s Sleeping Beauty Diamond Edition Blu-ray + DVD before it goes back into the vault!  And click the two buttons above to download a number of free printable Sleeping Beauty crafts, activities, and games. 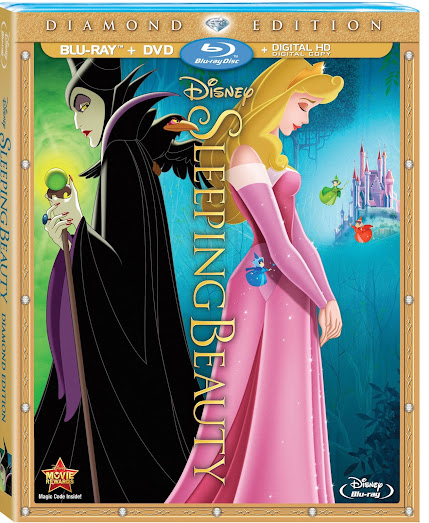 Have you watched Sleeping Beauty Diamond Edition yet?