Our family loves games of all sorts.  Video games, card games, board games, active games.  If you can play it, we probably will give it a try.  So we were pretty excited when we recently had the chance to have a family game night with games from Hasbro.  They sent some of their new toys based on Angry Birds, an app that the entire family at one point or another has spent hours flinging birds at gravity-defying structures.  The extra-cool part is that these Angry Bird toys are based on the Star Wars franchise, something we all love. 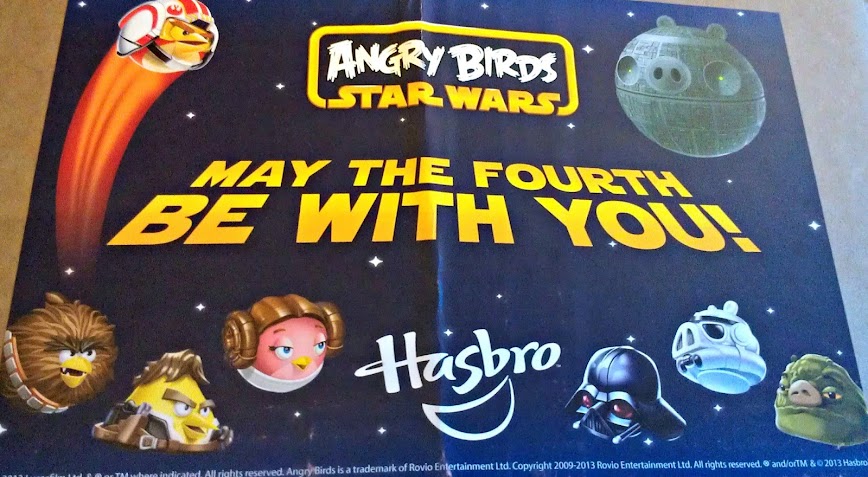 Bubbles loves anything that comes in the mail but was especially intrigued by a box sealed with a cool Angry Birds Star Wars sticker.  “What is it Mama?  What is it Mama?” she kept asking as we opened it.  Before I even had all the flaps open she stuck her little hand in and pulled out what may be the coolest foam ball I’ve ever seen.  It was a Chewbacca Angry Birds™ Star Wars™ Foam Flyer and seriously – so cute.  She claimed it for herself and ran off to “show Daddy, show Daddy!” 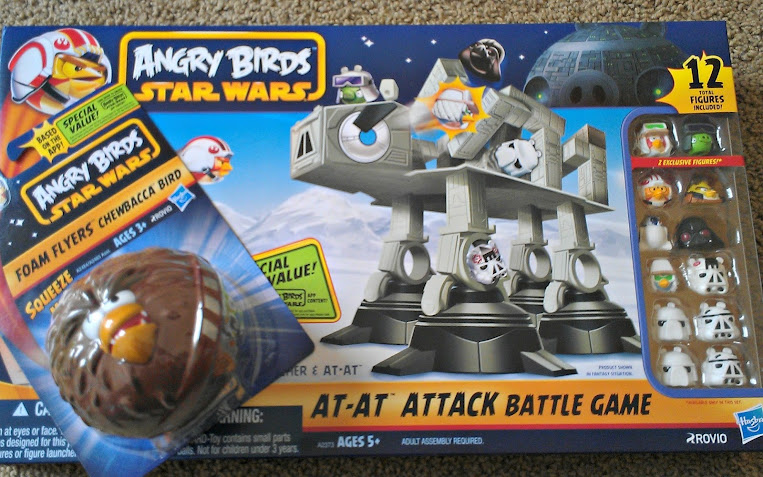 While she was “showing Daddy” I finished opening the box and discovered the Angry Birds™ Star Wars™ AT-AT Attack Battle Game.  I could tell right away that it was going to be all kinds of fun.  I mean, you get to fling small characters from Star Wars and try to take out the AT-AT and “dark side” characters.  Having in the past watched Bubbles grin with glee as she’s knocked down her block towers I have a feeling most kids enjoy a similar sentiment.

I did worry just a bit about the set up of the AT-AT.  I was envisioning dozens of little plastic pieces that needed to be popped out of the packaging and then carefully assembled according to poorly-written instructions, like many games I’ve put together in my day.  I was pleasantly surprised at both the packaging and the set up.  The smaller AT-AT pieces were all in a plastic baggie and the larger pieces were held in with cardboard “buckles”.  Thank you, Hasbro, for not using those zip-tie things in this box! 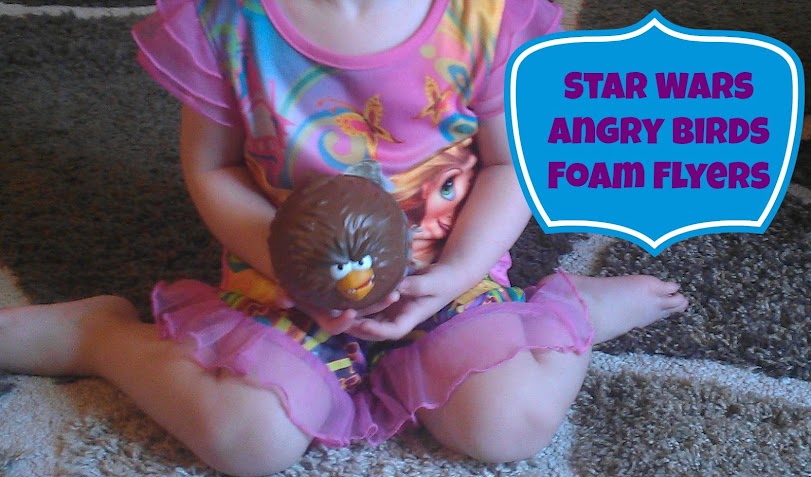 While I worked on putting the AT-AT together Bubbles was playing toss with Chewbacca.  The ball is the perfect size for her and with it being so soft I don’t have to worry about her getting too zealous and hitting someone in the face with it.  She giggles over his little bird face and I think I will be picking up some for my little cousins for Christmas this year.  In addition to Chewbacca there is Luke Skywalker, Darth Vader, and a Stormtrooper. The AT-AT was up and ready to go in under five minutes.  Seriously my kind of game.  When you have anxious little kids and the game setup takes forever they either lose interest by the time you’re done or are nearly impossible to keep from taking everything apart before you’re finished.  There is no “right way” to set up the AT-AT; they do show you a picture of one design on the instruction flyer but one of the cool parts of the game is you can build it any way you want.  Let the kiddos have fun and be creative.

The game isn’t recommended for those under the age of 5 due to the small parts.  Bubbles doesn’t really put things in her mouth, and I wouldn’t let her play with it alone,  but under our supervision she really enjoyed pulling down the Lightsaber Launcher and knocking stuff over.  It’s a game kids of all ages would enjoy so I think I may take it to my in-laws this weekend for the Derby party so everyone has some entertainment. 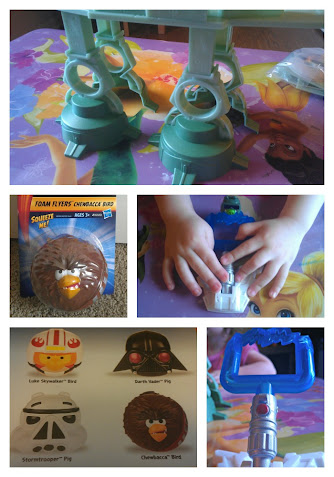 The Foam Flyer retails for $9.99 and the AT-AT Attack Battle Game retails for $39.99.  For one of you, though, the price will be $0 as Hasbro will be sending one lucky winner Angry Birds Star Wars toys of their own!  Giveaway closed.  Congrats Colleen!

How do you and your family spend family game night?

I received the above product(s) in order to facilitate my review. No additional compensation was received and all opinions, as always, are 100% that of myself and my family. Giveaway sponsored by Hasbro.