I’m not exactly a stranger to wildlife.  Growing up I saw bears and moose on my porch, heard wolves and coyotes howling through the night, and I’ve even had a deer hit my car.  Yes, you read that correctly: a deer jumped out of the ditch and bounced off the side of my car.

What’s a little new to me is the aggressiveness and possessiveness of a generally docile creature: a bird.  And I don’t mean seagulls, which can be very aggressive, or even predatory birds like a hawk.  Just your general run-0f-the-mill small bird, like a robin. 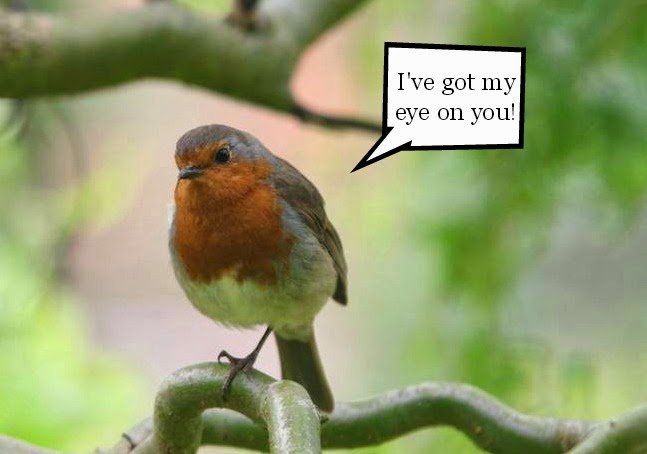 Last year my husband came back in the house and announced that a bird had taken a diving swoop at his head as he tried to enter the garage.  I’ve seen birds fly into doors and cars before, so I just assumed it was disoriented, so we kind of laughed it off.

Until the next day when I went out to get the mail from the box and he swooped at me.

At first I thought maybe he had babies in a nearby nest they were trying to protect, so I kind of ignored him.  But for the rest of the summer, you sometimes felt like you needed to cover your head with one arm when you left the house.  Apparently, he thought we were living in HIS house.I had to shoo him off on more than one occasion if Bubbles was riding her trike in the front yard; he’d move away from us, but stay perched up on the wires and keep an eye on us.

When we didn’t see him for awhile, I had hoped he’d given up and found a new place to live.  But the other day Bubbles and I came home from shopping and my husband stopped me at the door and said, “The bird is back.”

And apparently he got a little bolder while he was sunning it up down south over the winter, because he actually flew into the garage and started knocking things over.  And not by accident, like he didn’t mean to be in the garage.  My husband said he flew in three or four times, even landing on and trying to attack Bubbles’ stroller.

It’s going to be a long spring and summer if Mr. Bird thinks he’s the owner of the house.

One Response to “A Note to the Birds: This is Not Your House”