Over the weekend I had the opportunity to attend a virtual hangout with Katherine Heigl and Will Arnett, the voices behind two characters in the upcoming movie The Nut Job.  Just another Saturday afternoon, right?  They popped in after the L.A. premiere to talk with us about the film, being parents, and more.

In animated 3D, The Nut Job is set in fictional Oakton and follows Surly (voiced by Will Arnett), a mischievous purple squirrel.  After a hot dog stand heist by Grayson (voiced by Brendan Fraser) and Andie (voiced by Katherine Heigl) goes wrong, Surly is banished from the park by Raccoon (voiced by Liam Neeson).  With the help of his rat friend Buddy (voiced by Robert Tinkler), Surly plans a nut store heist of epic proportions.

The Nut Job opens this Friday, January 17th.  While I haven’t had a chance to see it yet, it is rated PG so it’s likely appropriate for most kiddos.

Katherine Heigl and Will Arnett were both great to speak with.  Very funny and easy-going.  My question was one that was asked, and so be sure to watch the video hangout above to hear whom they would each call if they were going to get into some mischief.  You’ll even get to hear them coin a new term – “McGyve”. 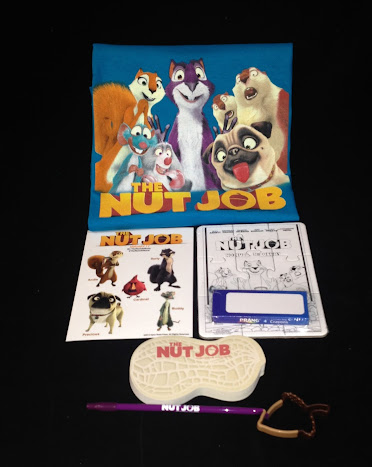 To get in the spirit of the movie, I have a prize pack full of The Nut Job merchandise to give away.  The prize pack includes:

Whom will you take with you to see The Nut Job?