I received Idea Village products in order to facilitate my post.  All words and opinions are my own.

Growing up I always loved those “As Seen On TV” items.  They always seemed so interesting, and often so necessary to my daily life.  Granted I was about 10 at the time, but still.

I didn’t really have my own credit cards back then, either, so I didn’t get to order too many of those “must have” products.  But when you become an adult and you’re earning your own money, you get to make choices you might not have been able to as a kid.  And one of those choices was to pick up some of those “As Seen On TV” items that had been so tantalizing in my youth. 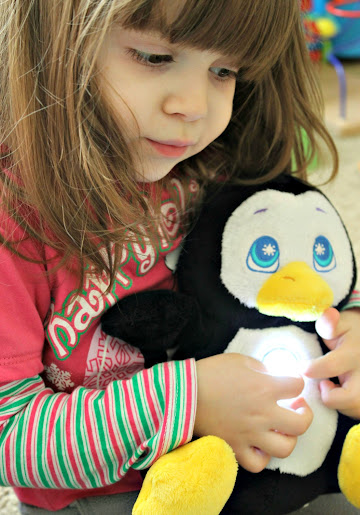 It may be genetic, as Bubbles recently caught a commercial for Flashlight Friends and decided that she really wanted one.  I thought they were kind of cute, too, and hoped that it would help her sleep better if she knew she had a light she could turn on at will.  That ended up being wishful thinking, but they’re still really cute.

The light that is built into the Flashlight Friends is bright.  You’ll definitely be able to find what you’re looking for, or to scare away any under-the-bed monsters that are creeping around.  They’re safely secured inside of the buddy; there’s no worry of it falling out or breaking off.

In addition to the Black Penguin, which is both adorable and very snuggly, there are five other options currently available.  There is a Purple Panda, Blue Puppy, Green Dragon, Green Turtle, and Pink Unicorn.  Definitely a choice for whatever kind of buddy your kiddo is looking for.

Of course Idea Village doesn’t just have items for kids.  They also offer the Micro-Touch Switchblade.  The Micro-Touch is a 2-in-1 lighted trimmer that has both mini and full-size trimmers for tidying up any stray hair.  Hubby always seems to be trimming up his facial hair so having something small like this has been useful.  Now he doesn’t have to pull out his full grooming tools just for a quick tough-up.

The Micro-Touch is sensitive on skin.  He didn’t have any tugging or irritation to report which is important.  There’s nothing worse than using a razor of some kind that isn’t up to the task; you’ll just end up with cuts and bumps.

Idea Village has a number of other gift ideas, too.  Be sure to visit the Idea Village website to see them all!