I received copies of these two Disney holiday classics in order to facilitate my review.  All thoughts and words are my own.

Christmas and Disney are two of my very favorite things.  And any time the two are married together, I’m even happier.  So when I saw that two of my favorite Disney Christmas movies were now available on Blu-ray Combo Packs, I knew I needed to add them to our holiday classics collection. 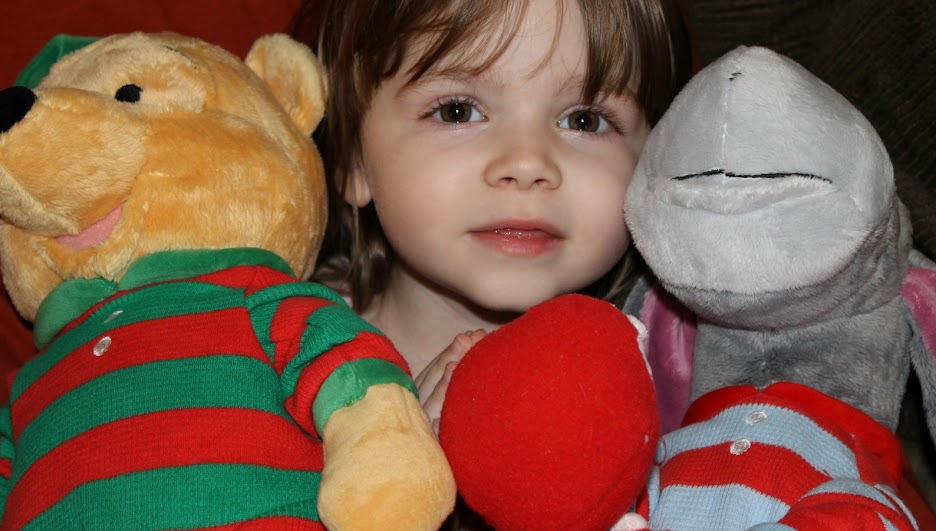 When our DVDs arrived I gave Bubbles the choice of which one she would like to watch first.  She chose Winnie the Pooh: A Very Merry Pooh Year which I have seen but she had not.  We, of course, had to snuggle with her Christmas-themed Pooh and Eeyore while we watched. 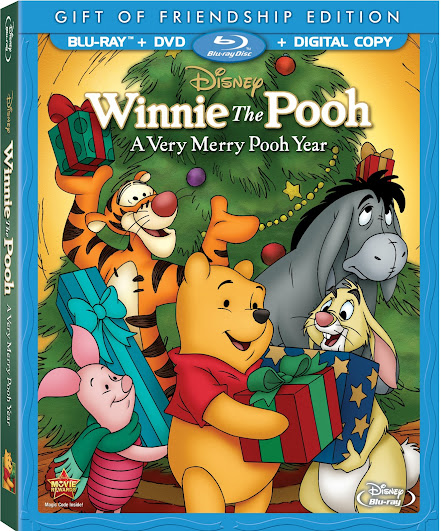 Winnie the Pooh: A Very Merry Pooh Year starts with Pooh hiding his Christmas present for Piglet as all his friends arrive to celebrate Christmas Eve in the Hundred Acre Wood.  One thing I love about this particular Pooh movie is that it includes Badger, whom doesn’t (pardon the pun) see the light of day much anymore.  Pooh stashes his gift just as his friends let themselves in.

As they deck the tree and set out the gifts they’ve brought, they tell Roo the story of a previous Christmas.  If this looks familiar to you, you’re not wrong.  It’s from the Winnie the Pooh and Christmas, Too special.

The story they tell Roo is about the time that the friends’ letter to Santa didn’t make it to the North Pole.  Pooh and Piglet did their best to make everyone’s Christmas wishes come true, but things didn’t work out quite the way they wanted.  Fortunately Christopher Robin saves the day. 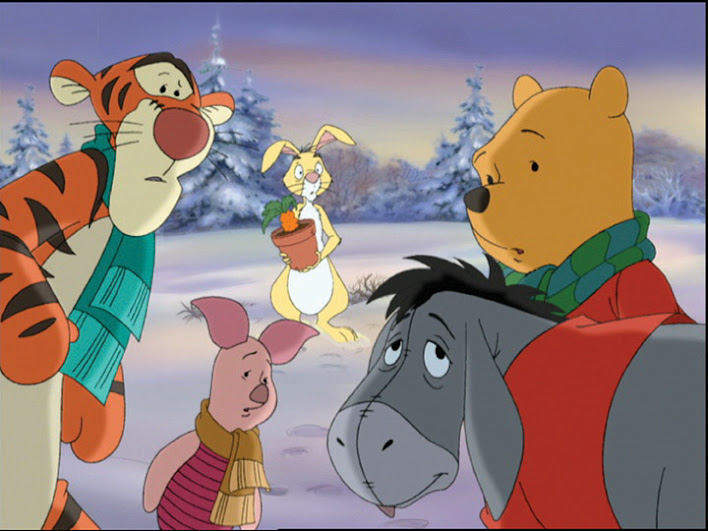 Also shared is the time that Pooh, Piglet, Eeyore and Tigger made resolutions to be “different”, as Rabbit was tired of bouncing, worrying, gloominess, and honey-eating.  He packed up his carrot destined to be his garden starter and headed off to live somewhere else.  In the end, though, the very characteristics he thought he disliked about his friends were able to help rescue him and he returns home.

Next we watched the 30th Anniversary Edition of Mickey’s Christmas Carol.  The fact that I am older than the movie was a little eye-opening; I’m not quite ready to be deemed a “classic”.  But this has long been one of my favorite shows to watch during the Christmas season so I was happy to finally have it on Blu-ray. 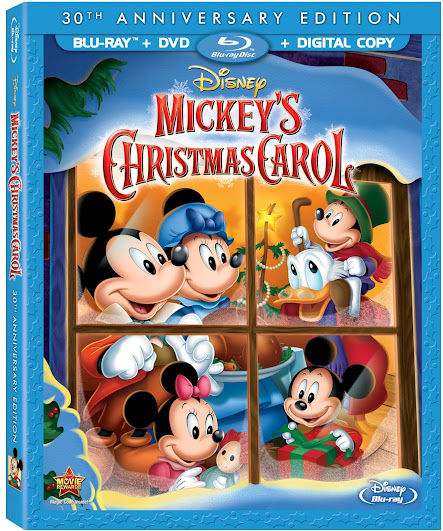 If you haven’t seen this film before, it’s Disney’s retelling of Charles Dickens’ A Christmas Carol.  Mickey fills the role of Bob Cratchit with Minnie as his wife Emily.  Goofy, Willie the Giant, and Pete take spots as the Ghosts of Christmas Past, Present, and Future.  And Scrooge McDuck is the perfect fit for Ebenezer Scrooge.

The Disney version follows the original storyline fairly closely.  Scrooge is visited by the ghost of his old partner Jacob Marley and encouraged to change his miserly ways before he’s left alone.  The Ghosts of Christmas Past, Present, and Future come to help him understand the error of his ways as well as show him the person he can become.

In addition to just being an amazing movie there are some great bonus features.  There are five included shorts: Pluto’s Christmas Tree (one of my favorites), Art of Skiing, Corn Chips, The Hockey Champ, and the new Yodelberg.  The collection of these restored gems is reason enough to purchase the 30th Anniversary Edition.

Which of these two holiday classics is your favorite?

One Response to “Holiday Classics from Disney: Mickey’s Christmas Carol and Winnie the Pooh A Very Merry Pooh Year”