This post on Disney trip deals is brought to you by USFG and Pixie Vacations.  I received promotional items as a thank you for participating.  All opinions are my own.

Bubbles has recently increased her pleas for a Disney vacation.  At least once a day she’ll start chanting “I do, I do, I DO want to go to Disney!”, or she’ll lay her head on your arm and say “Can we please go to Disney?”  It doesn’t help that we have a couple of flyers and DVDs on Disney trip deals and planning that have come in the mail that she studies out. 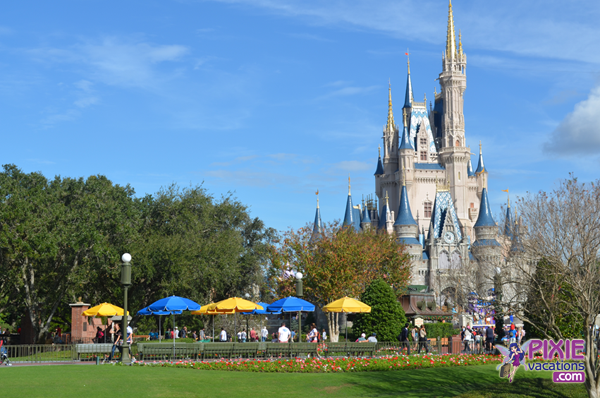 So while we haven’t 100% committed to going, we are starting to evaluate our Disney options.  For all the times I’ve been, I’ve actually never seen the castle lit up for Christmas, and I’m a little partial to perhaps going between Thanksgiving and Christmas this year.  If we decided to go right before Christmas, we’d be able to take advantage of this offer from Pixie Vacations:

The package is for 5 nights / 6 days at select Disney Value, Moderate, or Deluxe Resorts, and you’ll get a FREE Disney Water Park or DisneyQuest Ticket for each person in your party.  Available Disney Resorts for this Disney Holiday Special Vacation Package are:

Prices start at $118/person. Click this link to get an online quote: Christmas at Disney World Vacation Quote.

We’re also considering going in February before Bubbles’ birthday.  From personal experience, most days in January and February seem to be less crowded than many other times during the year.  If we choose to go then, we might take advantage of one of these Disney trip deals from Pixie Vacations:

Save Up To 35% – Select Walt Disney World Resort Hotels

The last few times we’ve been, we stayed at the All-Stars or Pop Century.  This time we’re eyeing the Polynesian, so I’m glad that it’s included in both the Christmas and 35% off packages.  It’s one of my favorite resorts on property, and hubby has never stayed there, so I think it would be fun.  We’ll have to see!

You can book any of the above packaged or request quotes by contacting Pixie Vacations:
Call 678-815-1584
Email: Info@PixieVacaitons.com
Request a Quick Disney World Quote Online

Pixie Vacations is a US based Mom and Pop company run by a family, “The Griswold” that worked at Walt Disney World for many years in Parks and Resorts. They have been to the parks and resorts more times than they can count, during all seasons, day and night. Steve and Lisa have been to the parks and resorts when they were kids, as college students, and as a family now with their kids. Steve and Lisa have eaten at the Disney resort and park restaurants, they have been behind the scenes and have possibly checked you in or given you park information from the Magic Kingdom information booth during one of your past trips.

Steve and Lisa are our friends and they know everything about Disney World and Disney Cruise Line. Contact them with your Disney Vacation needs and let them know we sent you. Disney has awarded them the status of Authorized Disney Vacation Planners. There is also no charge to use them.

Which of these three Disney trip deals are you most excited about?