I was provided with an advanced review copy of The Extraordinary Adventures of Adèle Blanc-Sec. All opinions are mine.

I’m not always the hugest fan of foreign films.  I like to read, I like to watch movies, but trying to read the screen while taking the movie in doesn’t exactly spell enjoyment.  But recently I heard about a new adventure movie titled The Extraordinary Adventures of Adèle Blanc-Sec that made me re-think my foreign movie stance.

I read the following boilerplate for the film and with talk of deserts, mummies, and museums, I thought Adèle sounded a bit like a female Indiana Jones:

The year is 1912. This is the story of an intrepid young reporter Adèle Blanc-Sec and her quest for the power of life over death. Her journey would take her to distant lands to face many dangers beneath the sands. She will go to any lengths to achieve her aims, including sailing to Egypt to tackle mummies of all shapes and sizes. Meanwhile in Paris, a 136 million-year old pterodactyl egg on display in the natural history museum has mysteriously hatched, and the creature subjects the city to a reign of terror from the skies. But nothing fazes Adele Blanc-Sec, whose adventures include many more extraordinary surprises… 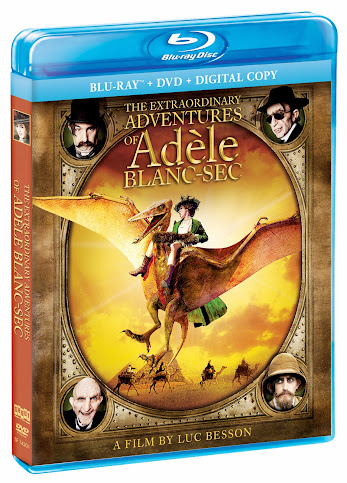 I love action-adventure movies and with the come-to-life pterodactyl, this one even had a bit of fantasy tossed in.  So though it was filmed in French, I was ready to give subtitles another chance in order to watch it.

Fortunately – I didn’t have to!  There is an option on the Blu-ray and DVD to watch it dubbed in English.  The other two options include the French audio track, or English subtitles.  While it might be a tiny bit distracting for some not to see the words and sound sync, I barely noticed it at all.

It did end up being a little different than I expected.  I figured mummies and extinct flying creatures meant there’d be a lot of campy, tongue-in-cheek humor but that wasn’t really the case.  Everyone seemed to act like, “Oh, a live pterodactyl?  Yeah, we saw that yesterday.”  There were a few parts that made me chuckle, though, most of them related to Adèle’s cheekiness with those who underestimated her, as well as her ingenuity.

The ending of the movie was quite a surprise.  It leaves it open to what could be a very interesting next adventure for Adèle.  I’m crossing my fingers that when the movie releases on August 13th that it catches on as much here in the United States as it has everywhere else in the world.  That way we’ll be able to find out what happens to Adèle when she… well, I don’t want to give away any spoilers, you’ll just have to watch it yourself!
0 Flares Twitter 0 Facebook 0 StumbleUpon 0 0 Flares ×