A few years ago, I developed allergies.  Oh, joy, right?  It was so confusing.  After all, I grew up in Maine, playing outside all the time, and we had a dog from the day I was born all the way through my college years.  Never so much as a sniffle or itchy eye.

But when they hit – they hit hard.  Seasonal allergies, with the occasional pet dander allergy thrown in for good measure.  I was a miserable mess of itchy eyes, congestion, the whole package.  As a wife and mom, I can’t simply say “I’m taking a sick day”, though, so what’s a girl to do?  There are a lot of options out there, but I had heard good things about Allegra, so I thought I would head to CVS and check it out.

Because I like to try and save money when possible, the first thing I did was turn to the CVS sale flier to see what all was on sale.   All the allergy brands appeared to be on some kind of sale this week.  But I found that for the entire month of May, Allegra 30 count is on sale for $17.99 with your CVS/pharmacy ExtraCare card.  I though that sounded like a pretty good deal, especially after comparing it to the other pricing in the flier. So I packed up Bubbles, who never misses the opportunity to go shopping, and headed to our local CVS. When we stepped inside I grabbed a flier (I had forgotten mine at home) to flip through in case there was anything else on sale that I wanted to pick up.  Then I swiped my ExtraCare card at the little kiosk that prints out CVS-specific coupons.  You never know what kind of goodies that thing is going to throw at you (sometimes they’re for free products!).  Nothing I could use on this trip, but I’ll definitely hold on to them for later. 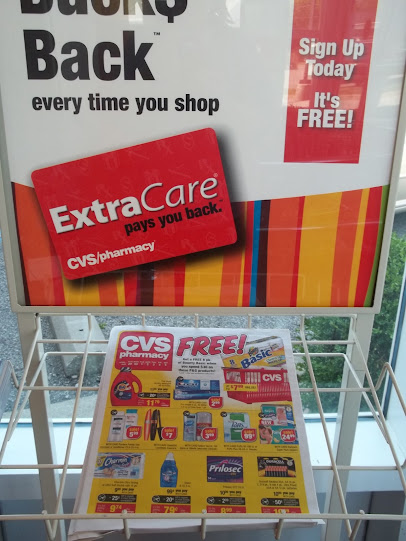 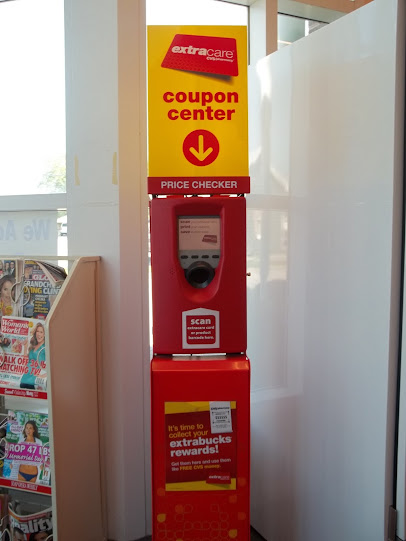 There was a only a quarter-aisle of allergy meds, and no endcaps or stand-alone displays, but with it’s pretty purple packaging (say that three times fast)  Allegra would still stand out from the rest.  The regular 24-Hour Allegra was fully stocked on the shelves in a variety of counts; the bright yellow sale sticker helped me hone in on the 30 count that was on sale.  They also had a handful of Claritin stocked above it, a couple of CVS brand below it, and a few Zyrtec, but that was all.  I was actually kind of surprised at the limited selection. 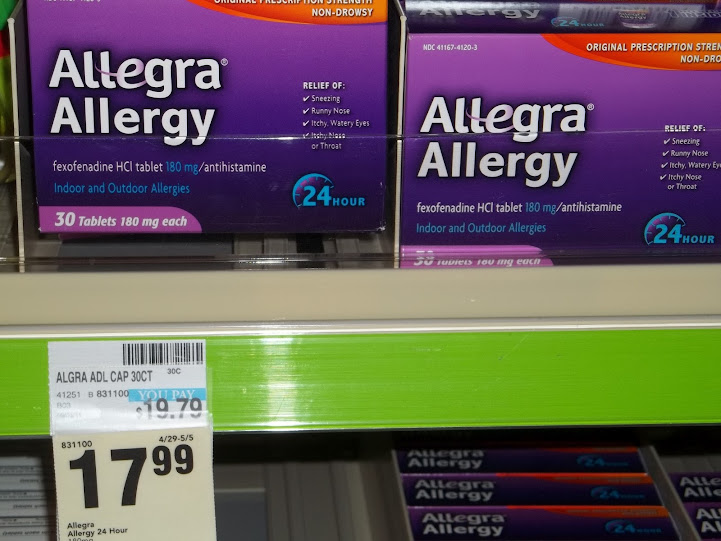 They also make Allegra-D, which is for allergy and congestion; even though it’s an OTC, you have to take one of the little cards to the pharmacy counter in order to purchase.  And they also have a children’s version, which though I hope she never needs it, is good to know in case Bubbles ever develops allergies.

After I had my allergy meds, we headed over to the cosmetics area.  Eye makeup tends to exaggerate “allergy eye”, but if my symptoms were going to be kept at bay, I thought it was time to update my makeup routine for the spring.  I’ve always loved how you can try new trends and colors with cosmetics; they’re easy on, easy off, and much less of an investment than other accessories.

There were LOTS of options.   I think you’d be surprised to find out just how many different types of mascara there are.  I had read in a fashion magazine awhile back very positive things about the Maybelline Volum’Express Mascara, so it was on my short list of ones to try. 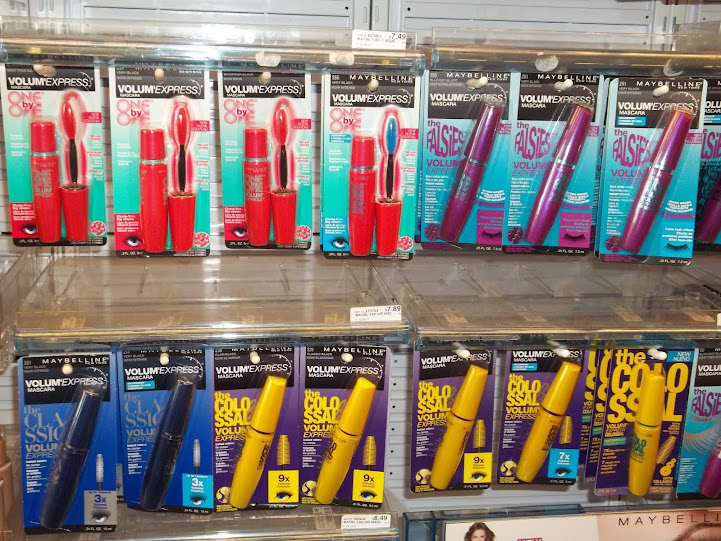 While I was trying to decide on the mascara, the eye shadows caught my attention.  It was a veritable rainbow for the eyes.  The bright colors might be perfect for spring and summer, but I knew exactly what I wanted: white.  While I was at a blogging conference earlier this year we were treated to some professional makeup applications.  The girl that I worked with had done the makeup at the most recent Miss America pageant and she shared a tip with me.  Dot just a little bit of white shadow at the inner corner of your eyes and it will open them right up and make your eyes nice and bright.

To help make my final decision I flipped open my CVS sales flier to see if there were any special cosmetic deals.  There were extrabucks available in differing amounts depending on which brand you purchased.  Between having really wanted to try the Maybelline mascara, and finding out that I could get $5 in extrabucks with a $15 Maybelline purchase, it was enough to help me choose.  I picked up an eyeliner and brow pencil duo to make the $15 minimum, tossed in a nail polish in the hot new color of the season (tangerine), and headed to the checkout.

Once we arrived back home, I quickly opened everything up.  I’m not exactly awesome at waiting to use new stuff (I know I’ve previously shared that I’ve worn new shoes out of the store before).  I also popped one of the Allegra tabs so that I could start to get some relief. 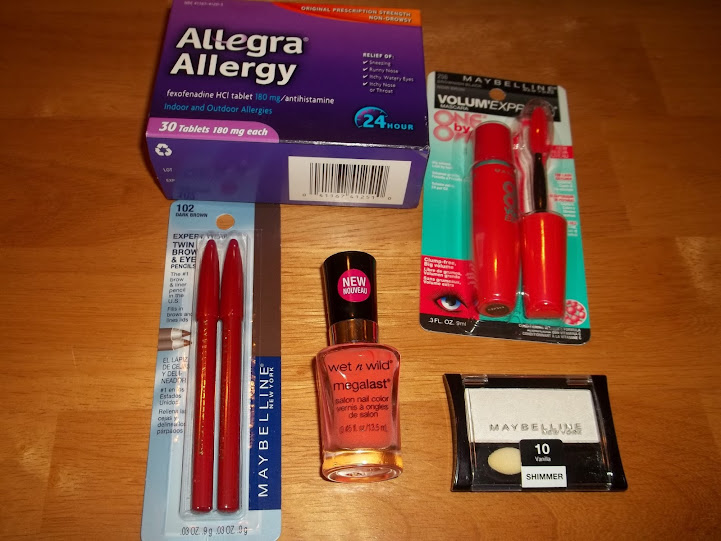 Can you believe you can feel & look great with all of this for under $25?  Score!

Here’s the mascara wand that was the driving force behind the positive reviews.  I think it’s made from silicone. 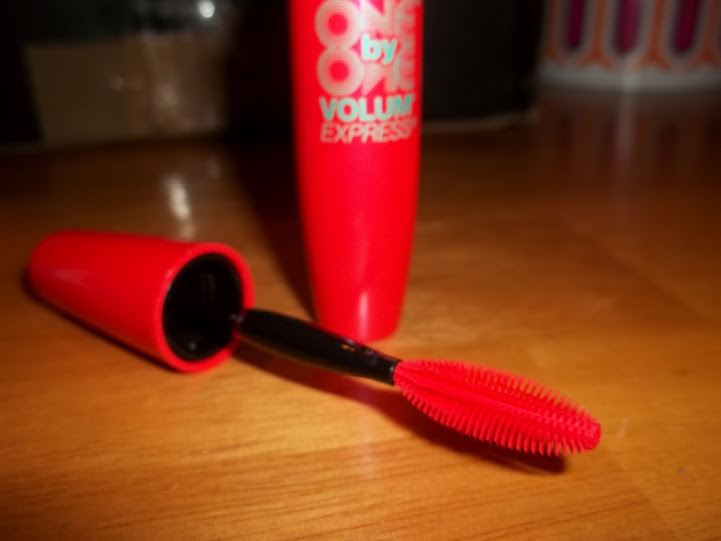 And here is what my eyes looked like before Allegra and all my pretty new makeup:

And after the Allegra kicked in and I played around the the mascara, liner, and shadow, they looked like this:

I can easily tell the difference!  My eyes look much happier and the mascara made my lashes look longer than I had thought possible.  Allegra and I are going to be great friends this spring, I can tell already.  I have an outdoor party on Saturday and this will definitely help me go strong all day.

You can see my entire shopping trip by reading my Google+ Story.

I am a member of the Collective Bias™ Social Fabric® Community.  This shop has been compensated as part of a social shopper insights study for Collective Bias™. #CBias #SocialFabric

6 Responses to “Look Great and Feel Great, Even in the Middle of Allergy Season”