This weekend I had the pleasure of hosting a Cottonelle Roll Cover Party for myself, some friends, and their kids.  We got to check out the new Roll Covers designed by Jonathon Adler.  We also had the opportunity to repurpose those classic cardboard tubes into some fun new crafts!

There are so many different things you can do with cardboard tubes, but for our party, I decided we’d do two easy crafts.  The first one was finger puppets, and the second one was fairy party favors.  I thought it was perfect timing; they make great crafty Earth Day ideas, which happens to be this Sunday!   To stay in the reduce, reuse, recycle spirit, I wanted to try and use mostly – if not solely – supplies from around the house.

The penguins used the following materials:

To start, draw the shape of the penguin’s belly onto the cardboard tube.  Just above the belly area, draw two eyes.  Then, using the black marker, color in everything other than the belly and eyes.  You can also draw on a little bow-tie if you’d like. 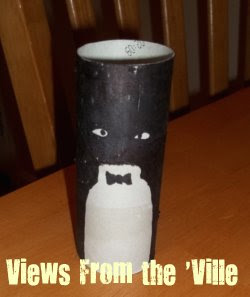 Next, use a hole punch or a craft knife (adults or older kids only) and either punch a hole or cut a hole where the nose goes.  Insert the neck of the balloon into the hole and pull it through until the balloon resembles a nose.  (You could also use pipe cleaners if you wanted; I had balloons left over from Bubbles’ birthday that I was using up.) 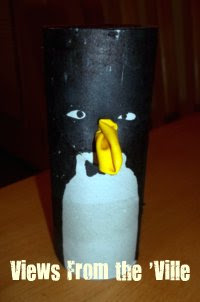 Now (adults or older kids can do this for the younger folks; safety scissors don’t work that well on felt) cut a strip of felt about 1×6″ long.  Fold it in half, and cut the felt at the fold line, so you have two pieces of felt the same size.  Cut a slightly rounded shape from one end of each felt piece.  These will be your wings.  Glue one wing to each side of the body.  We used a couple of glue dots on each side to make it easy and less messy.

Ta da!  Penguin finger puppet.  You could make any number of animals once you get the basic idea down.  With some yarn and a pompom, you could make a lion; a kangaroo can be done with a piece of felt glued on as a pouch and a couple of small strips for ears.  The only limit is your imagination!

To start, unfold your sheet of tissue paper, and cut off 2/3rd of one sheet.   Set aside the small piece for another project.  Fold the 2/3rds sheet in half along the longest side (will probably match the crease if your tissue paper comes packaged like most).  Then place the cardboard tube lengthwise along the short end, and tape in place. 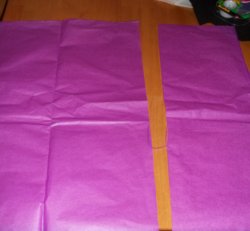 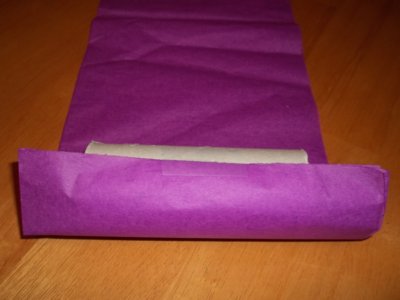 Roll the tube all the way down the tissue paper, and tape into place.  Then fold the extra tissue paper on each end over the edge and tuck inside the tube.  Have an adult (or older child) cut out a square of felt that’s about 6″x6″.  Use the scissors to cut a wavy pattern into each side of the felt; it will look sort of like the petals of a flower.  Cut a circle (or an X slit) in the center of the felt and slide it onto the wrapped tube.  Then tie a bow around the middle using the ribbon. 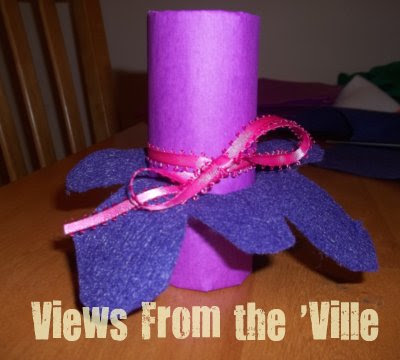 I think they’d be perfect for a Fairies birthday party (in person, they seriously remind me of Tinker Bell and all her friends).  You could even make a little fairy wand and tuck it under the bow and felt.  Next, fill them with candy, and you have instant party favors!  You can tuck some of the extra tissue paper into the bottom if you want to make sure that the favors don’t fall out. 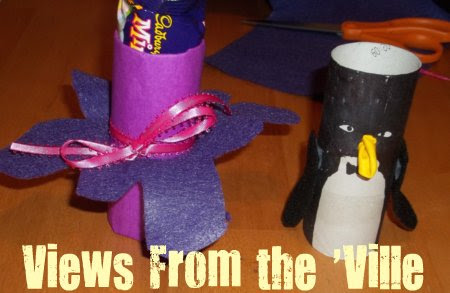 We also decided that the designer roll covers could easily be repurposed to corral markers or crayons, on your desk to store pens & pencils, candy and snack containers – so many things!  The lids fit really snug so you don’t have to worry about everything to come flying out if they get knocked over.

What crafts would you make with your kiddos using cardboard tubes?

I participated in a campaign for Mom Central Consulting, on behalf of Cottonelle, and received product samples and a promotional item to facilitate my party.