I am a member of the Collective Bias® Social Fabric® Community. This #NewFavorites DIY spa day shop has been compensated as part of a social shopper amplification for #CollectiveBias and its advertiser.

I was an RA (Resident Advisor) for three years during college.  One of my absolute favorite things to do was host DIY spa days (well, nights) for the girls on my floor.  I would order pizza, and then break out the nail polish, facial masks, foot soak, files, anything we needed for a night of pampering. 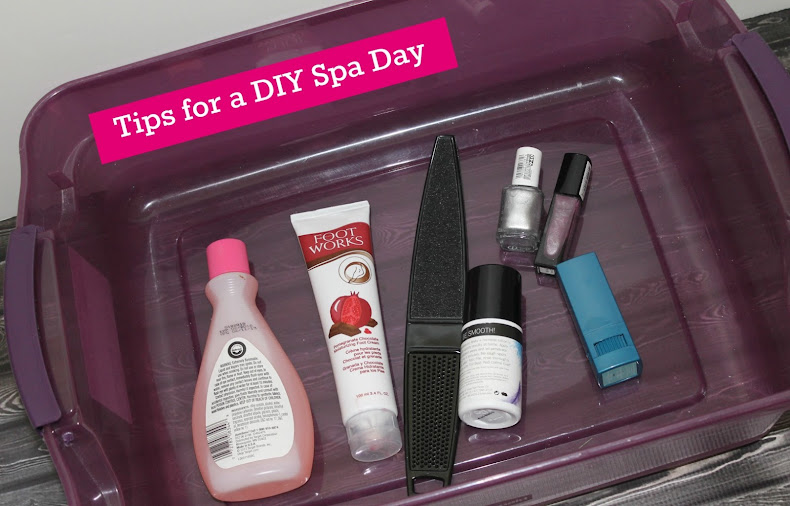 To this day, a mani-pedi is one of my absolute favorite ways to relax.  Making time for (and justifying the expense of) visiting a local just to get my nails painted isn’t something I do that often these days, but it doesn’t mean I want to give up the luxury of pretty nails.  So I’ve continued my tradition of DIY spa days in my own home.

To get the most of your spa day I like to set up all my supplies in advance.  Standard equipment for me includes a plastic tub or bin (to use as a soak), polish remover, some kind of foot scrub, a file, toe separators, and nail polish.  Occasionally I also use a DIY coffee sugar scrub that I learned how to make when I was working at a tanning salon years ago.

When I clean, I work from the top down.  But when I’m doing DIY spa treatments I work in reverse.  This way I don’t ruin whatever polish job I have accomplished on my fingernails as I buff, scrub, and file everything else. 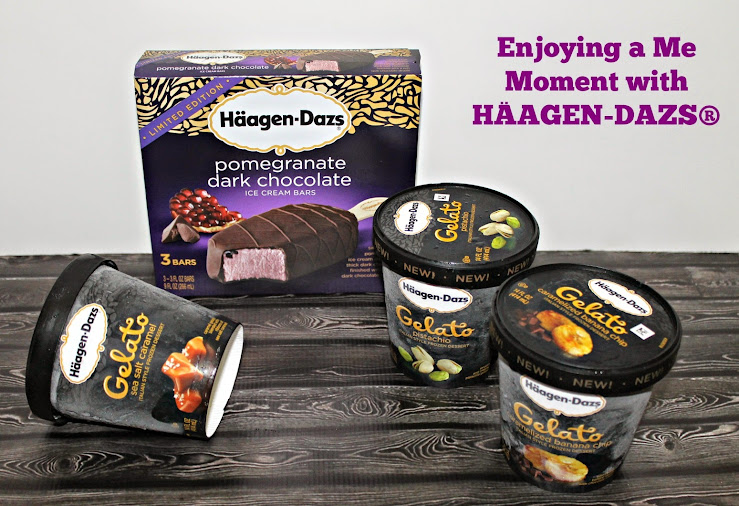 I like to throw in additional pampering while I work, too.  If I’m carving out fifteen or twenty minutes for myself during the week, I want to get the most out of it.  So while my feet soak I’m usually thumbing through one of my favorite magazines or a book while I stream music through a wireless speaker. 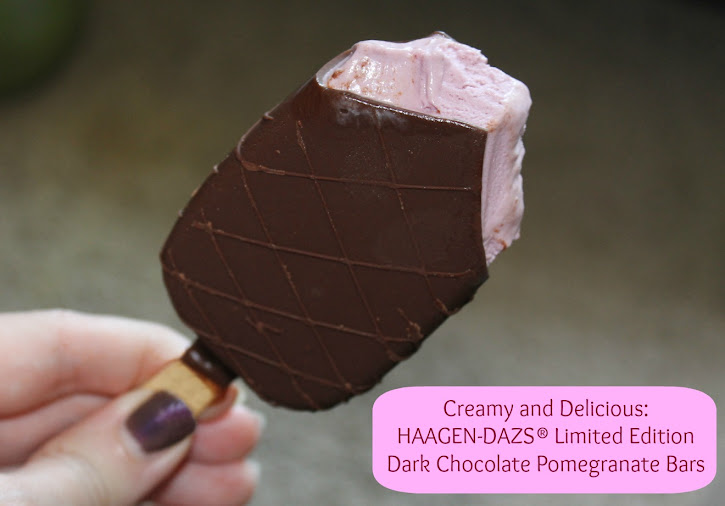 The other way I treat myself is through an indulgent snack.  Something that I can nibble on that tastes as decadent as I feel once I’m all prettied up.  One that I recently tried was the new HAAGEN-DAZS® Limited Edition Dark Chocolate Pomegranate Bars that I came across at Walmart.  Pomegranate has long been one of my flavors and when you pair it with dark chocolate you have a serious win. 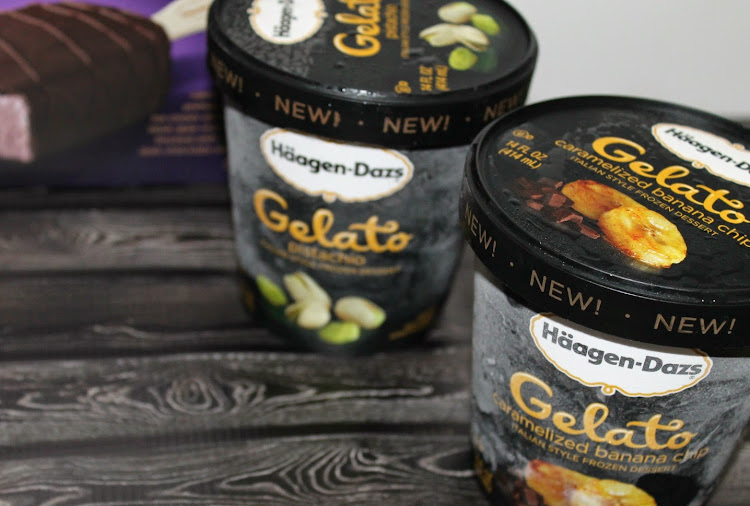 I also tried some of the new HÄAGEN-DAZS® Gelato flavors.  Honestly, when I saw the words “Caramelized Banana Chip” I just couldn’t walk by.  I had never had gelato before, either, so I thought it would be a good opportunity to try something new. 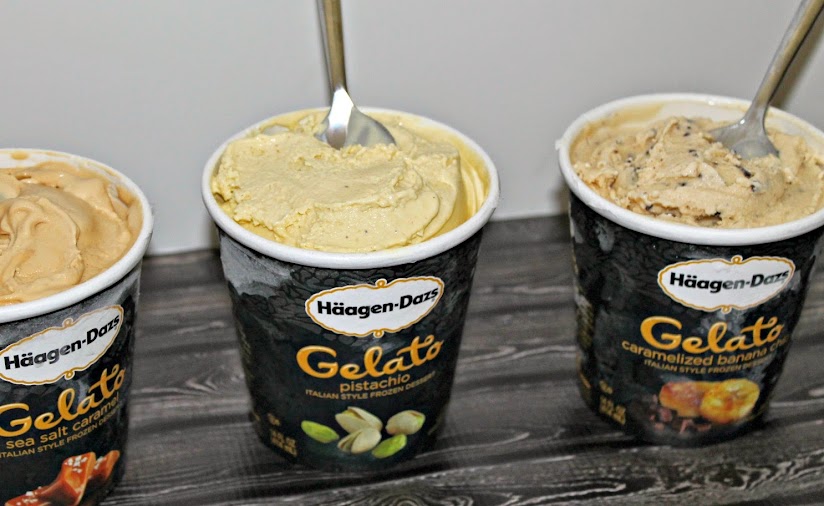 If you’ve never had gelato, the texture is amazing.  So smooth and creamy and delicious.  And if you’ve ever had one of the chocolate-covered frozen bananas from the happiest place on Earth, that’s exactly what the Caramelized Banana Chip tastes like.  Only in a form that literally melts in your mouth.  My husband tried to steal it, it’s that good. 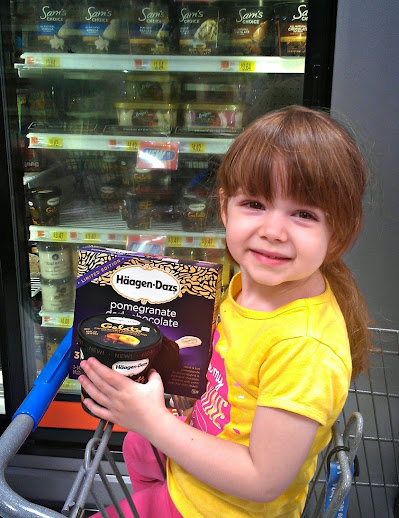 It’s been a little hectic around here lately.  First there was Easter, and then Ashley’s thesis defense which we went out of town for, then I was sick, and of course the Derby party.  Spending my DIY spa day nibbling on HAAGEN-DAZS® Limited Edition Dark Chocolate Pomegranate Bars and licking HÄAGEN-DAZS® Caramelized Banana Chip Gelato off of the spoon was the perfect way to take a little breather and regroup.  With Ashley’s graduation just a few days away, and then the join graduation party, followed by Austin’s graduation – oh, and don’t forget Mother’s Day in there somewhere – I may need a few more of these days!