I have to say one of the things I find myself excited about as Baby C. gets older is the upcoming years of doing crafts together.  I loved crafts when I was a kid, and I love them now, but having a little one to do them with not only will add to the enjoyment but will also force me to not make excuses about “not having enough time” and just go do them.

I wanted to share this one with you sooner than Monday; since Halloween is right around the corner I thought if you were interested in making it yourself, then at least you would have this weekend to do it.

I’ve been trying to think of things to do with baby food jars since we have an unending supply around here.  So I thought that little luminary jars would be really cute – and they are!

For this craft you’ll need:

Using masking tape (or stickers) add a letter or image to each baby food jar.  I decided for my first set to spell the word “Boo” using three jars.  I wanted to make them semi-uniform so I put a couple strips of masking tape together on one jar, drew the word “Boo”, cut out each individual letters and then placed one letter on each jar. 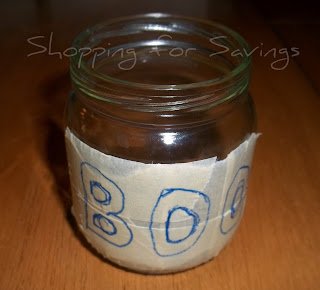 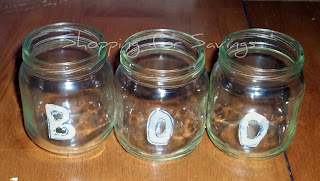 Then, using a sponge brush, I painted the jars with a coat of orange paint, painting over the masking tape letters.  After they dry, carefully peel the masking tape off to reveal the letters.  Originally I had planned to leave them like that but the candle flame was directly in the unpainted areas and obscured the phrase.  So I used the corner of a brush and filled in the space with white paint. 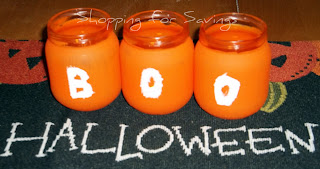 I dropped a votive into each jar and when they’re lit in the dark they look a little like this: 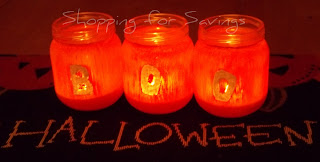 You can easily change these up for different occasions and holidays; I can see doing these at Christmas with Ho Ho Ho on them (two letters per jar).  There are lots of great baby jar crafts you can make!

What is your favorite Halloween craft?