Today is National Girl Scout Day. Each year they celebrate the creation of the first Girl Scouts group which formed on March 12th, 1912. I personally was never a Girl Scout but I’ve purchased my fair share of Girl Scout cookies over the years. 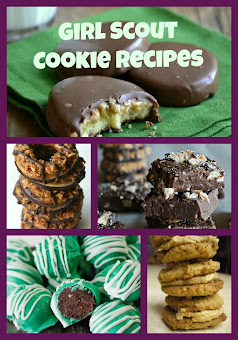 Lately I’ve seen a number of recipes on Pinterest showing how to make your own homemade Girl Scout Cookies, as well as a number of other recipes that use Girl Scout cookies as an ingredient.  I thought it would be fun to share some of those recipes with you, as eating cookies sounds like a great way to celebrate any special occasion!

I will definitely have to give the homemade Samoas recipe a try as they’re one of my husband’s favorite cookies.  But the Tagalongs with no butter and no sugar are intriguing, too, so I may have to give that one a try as well.

If you have some extra Thin Mint cookies kicking around (ha ha, extra cookies. Funny, I know) may I suggest using them as a base for mini cheesecakes?  They are delicious when used that way.  They’re also great chopped up and mixed into a Grasshopper Pie.