Oz the Great and Powerful: Journey to Oz Tour Balloon 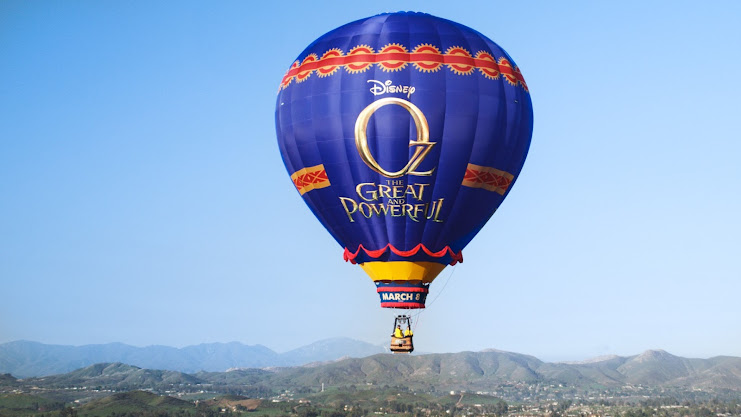 Hot air balloons have always been fascinating to me.  When I was very young, one abruptly landed on my parent’s lawn (true story, a topic for another post).  They are also a large part of the celebration around the Kentucky Derby.  There is a Balloon Fest (which includes a race, tour, and glow) here each year and it’s quite a sight with balloons of every color and dozens of designs.

So the new Journey to Oz Tour Balloon is something I find very cool.  The balloon had it’s first appearance during the premier at the El Capitan Theatre in Hollywood on February 13th (search the hashtag #DisneyOzEvent on Twitter and you may see some photos of it from a few fellow bloggers who attended).  The second appearance was today at the Disneyland Resort in Anaheim.  Two more planned stops include the Daytona International Speedway in Daytona Beach on February 20th and then Central Park in New York City on March 5th and 6th.

Head over to the Oz the Great and Powerful Facebook page and click on the Journey to Oz Tour Balloon app.  You’ll be able to select a city near you and vote for a special early IMAX screening of the movie by sharing your vote on Facebook or tweeting your city’s name out (for example #DisneyOzLouisville which, you know, feel free to tweet!).  Can you imagine the beauty of Oz rolling along in front of you on an IMAX screen?

You may also enjoy going behind-the-scenes to take a look at the Oz costumes and makeup.  The featurette is a few minutes long and is really interesting.  I always love behind-the-scenes looks and interviews; it really gives the movie that much more depth when you know everything that went in to making sure every detail was absolutely perfect.

Which piece of Oz the Great and Powerful news has been most exciting to you?

4 Responses to “Up, Up, and Away in the Journey to Oz Tour Balloon (Plus a Behind-the-Scenes Look)”