We’ve slowly been working on updates, home improvement projects, and redecorating ever since we moved into our new house a couple of months ago.  One of the things we’ve been planning to get around to was the lighting for the living room.  The living room was equipped with a ceiling fan when we moved in, but it wasn’t really our taste.  In addition, not all of the bulbs worked, and the ones that did were blindingly bright. 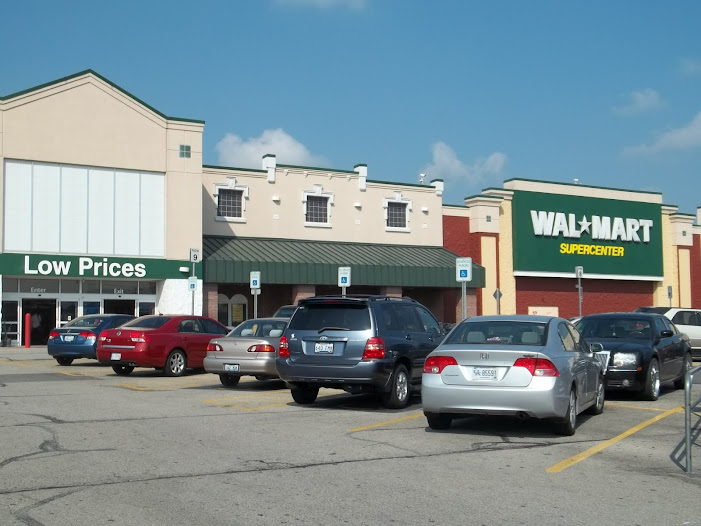 I realize we could have just changed out the bulb and made it work for awhile, but – well, it seemed easier to just turn the light portion off at the time.  This meant supplementing with a couple of floor lamps, which also wasn’t ideal.  Last week, though, a challenge was extended to replace my current incandescent lighting sources with #GELighting that is energy-efficient.  I thought it would also be a good opportunity for us to get serious and update at least a couple of light fixtures, too, so my husband and I packed Bubbles up in the car, and we headed to Walmart to see what we could find. 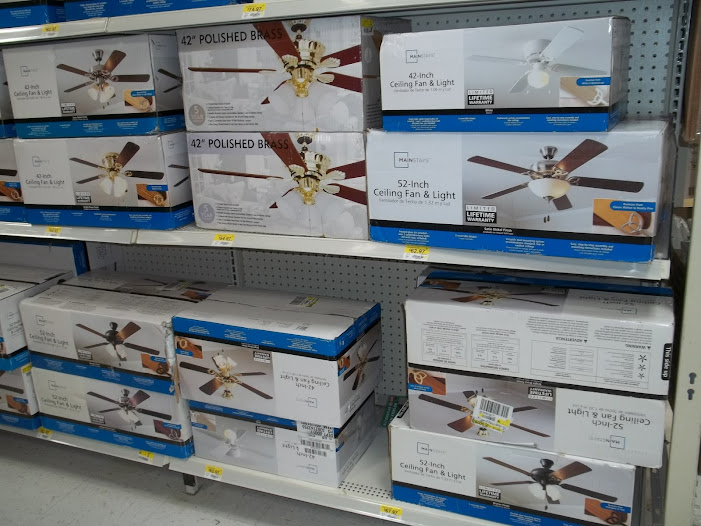 At the entrance to the lighting aisle there was an endcap display with one type of ceiling fan and light combo.  It was only 42″ and we were looking for a 52″, but we hoped it was a good sign that they had other ones, too.  Which they did!  Not a ton of them, and only a couple different 52″ ones, but we did find one that we thought would fit in with our decor.  The box said the light portion required three candelabra 40-watt bulbs, which were included, but they weren’t the energy-efficient kind that we were looking for. 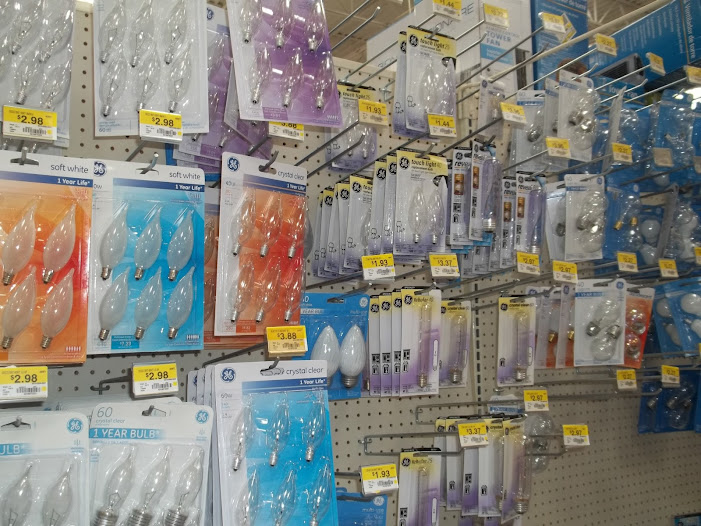 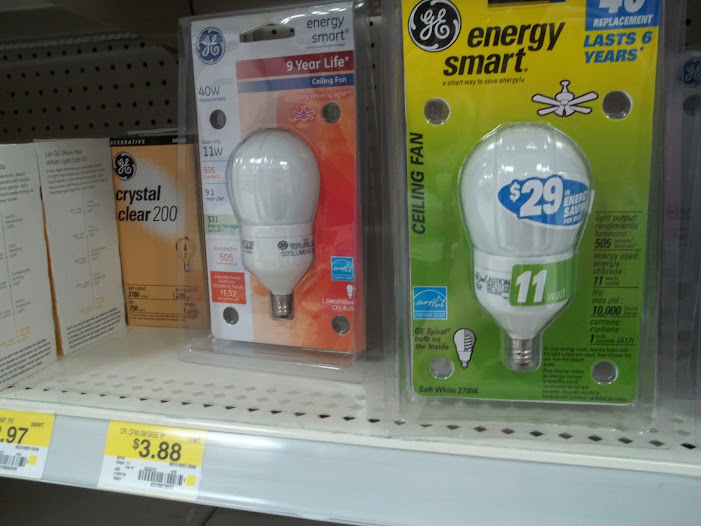 See the ceiling fan icon on the packaging? Thank you, GE, for trying to make it easy to figure out what we need!

We saw plenty of the candelabra-type bulbs, but couldn’t find any energy-efficient ones.  Then we lucked out; a Walmart employee wandered into our aisle and showed us where to look.  After locating them, my husband was a little concerned that they wouldn’t fit in the light fixture, as they appeared to be much larger than the other bulbs.  He suggested we only pick up one bulb until we were sure they would work.  GE Energy Smart light bulbs are initially a little bit of an investment – a single bulb for the ceiling fan cost almost $4 – his suggestion made sense. 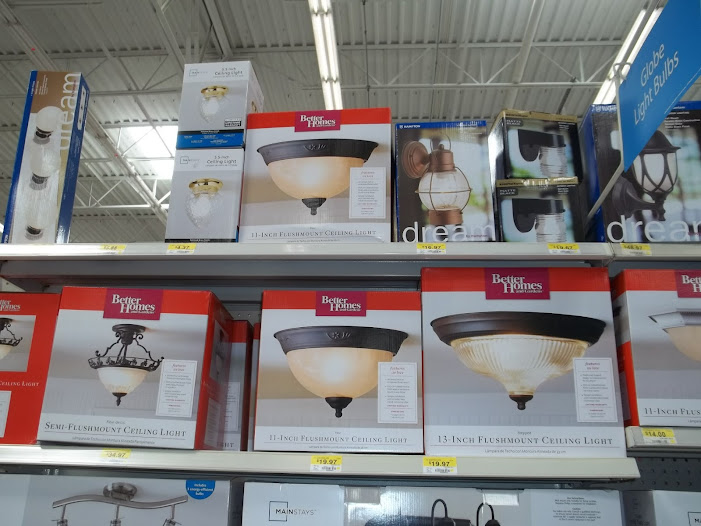 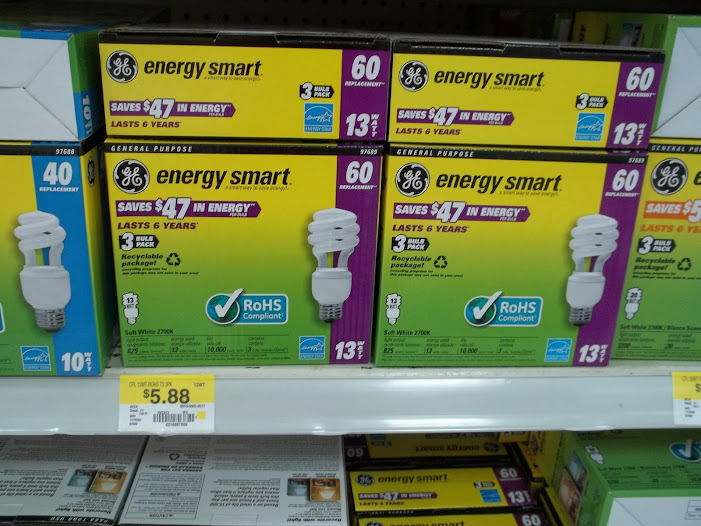 We also wanted to replace the flush-mount ceiling light in the foyer just off the living room; there weren’t a ton to choose from, and while we did kind of like one, in the end, we didn’t purchase it on that trip.  We did, however, look for energy-efficient bulbs that would fit the fixture we already had at home so that we could at least update the lighting.  We settled on a pack of the GE Energy Smart 60-watt-replacement CFL bulbs (they use only 13 watts) but as these also looked as if they might be too big to fit, we just bought one box.  See our entire shopping trip in my Google+ album.

When we returned home, my husband was anxious to start the project of replacing the old ceiling fan.  So anxious, in fact, that he had it ripped out of the ceiling before I was even done unloading Bubbles and all her gear.  This means I unfortunately don’t have a “before” picture to share with you.  You’ll just have to trust me on the being old and blinding thing.  A few hours (yes, hours; we ran into a little snafu in the replacement process.  Apparently they had put it up with drywall screws?  I really don’t know, I’m not super-carpenter-y like that) and a few trips to the store for hardware supplies later, we had a lovely new ceiling fan.  And the bulbs fit! 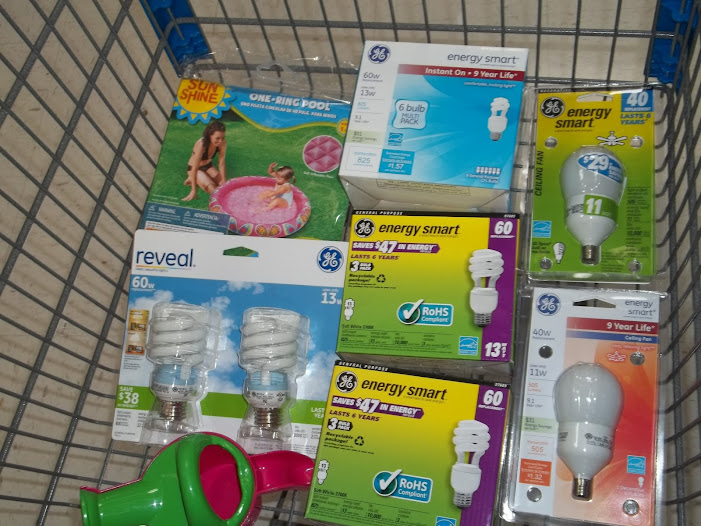 More GE Energy Smart bulbs (both for the fan and the regular 60-watt equivalent), plus a package of the Reveal CFLs. Plus a new kiddie pool and pool toy for Bubbles (her pool had a hole). 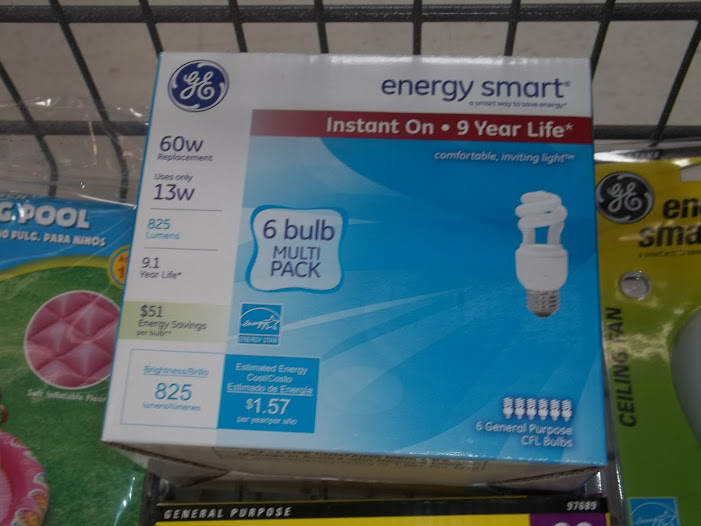 On the box it shows that each bulb is estimated to cost only $1.57 per year!

So back to Walmart I went to get the rest of the bulbs for the fan.  While I was there, I also decided to go ahead and get the flush-mount ceiling light we had originally looked at.  And I also filled the cart with quite a few more bulbs.  According to the GE Energy Smart CFL Savings Calculator I’ll realize an average savings of $136.95 per year – $750.40 over the life of the bulbs – by swapping out all the bulbs in our home.  Might as well do it all at once!  I did use two of the $2 off GE coupons (scroll way down to print your own) to help with the cost. 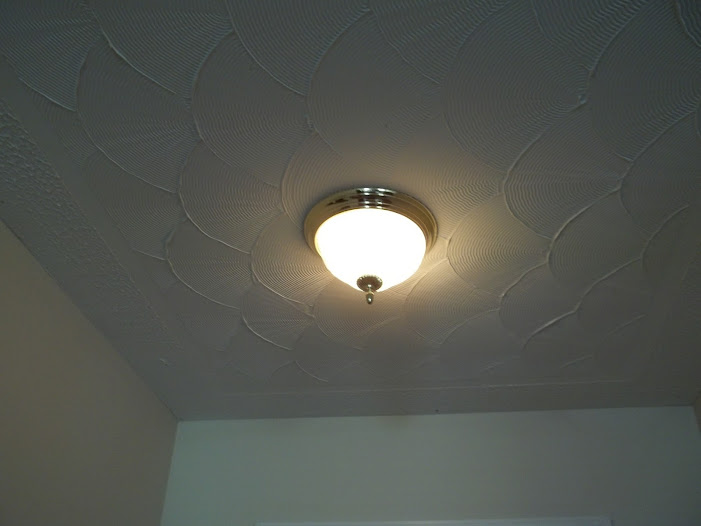 Please ignore the ceiling; scraping off the fan pattern is on our to-do list.

It’s kind of hard to describe the old foyer light; it was like a glowing bubble.  The light was bright right inside the fixture, but didn’t radiate light past that.  What light there was seemed stark, and left the majority of the foyer dark. 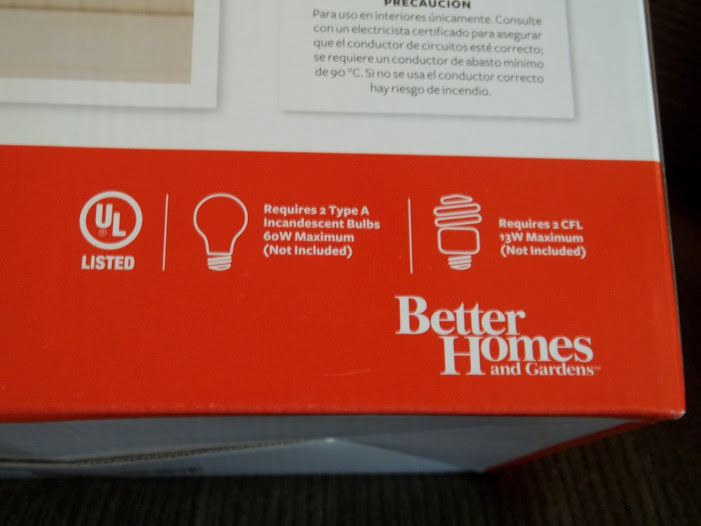 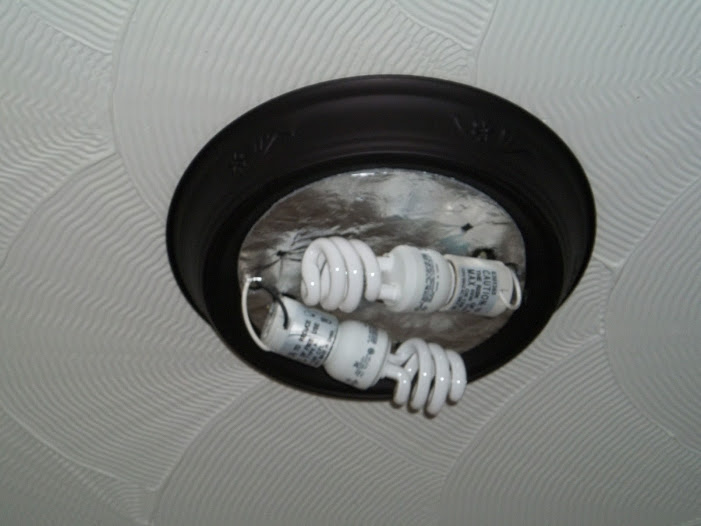 The bulbs did fit!

While hubby was putting up the new light I noticed on the light packaging that in addition to showing you which incandescent bulbs you need, it gives you the details on which CFLs you could use.  I love that it’s included on there; it makes figuring out exactly what you need much easier.

With both lights now up, we could see a huge difference in the feel of the room.  The lights were neither blinding nor too dim.  It was nice to be able to sit in our living room with the ceiling fan AND ceiling fan light on and enjoy our evening.  The GE Energy Smart CFL bulbs gave off a nice warm glow; not an orange-yellow, like some, but just warm. 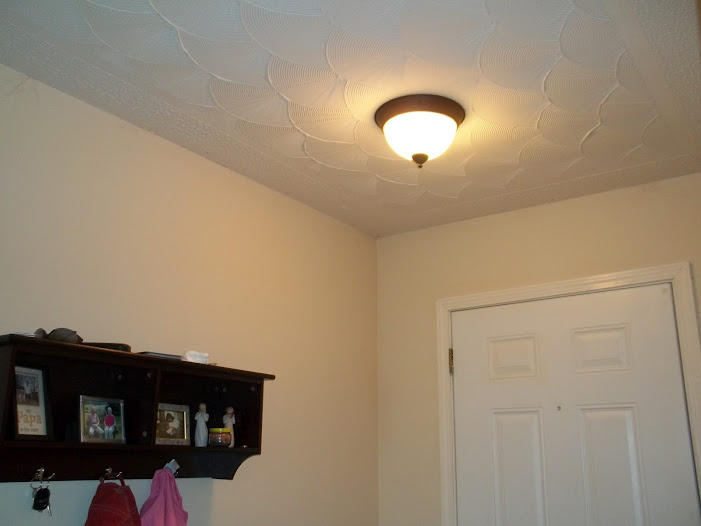 See the huge difference in the light and how it actually bounces off all the walls? The light reaches all the way to the floor. So much more useful! 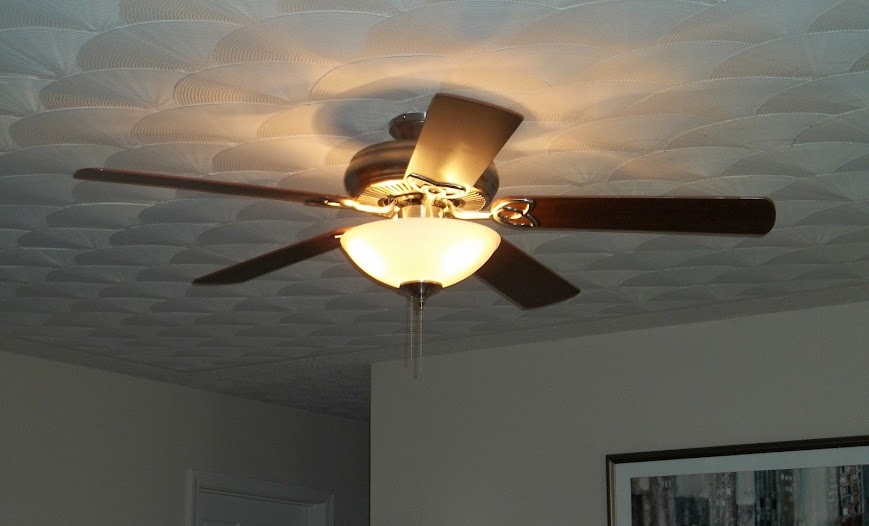 No blinding light! We really like the new, more usable, ceiling fan and light.

I learned a lot about lighting and light bulbs during this makeover.  Changing your lights really can have a huge impact on the overall look and feel of your room!  A flyer in the store mentioned that if you have north- or east-facing windows, you probably have cooler light.  If this is true for you, then you might want to consider the soft white bulbs (and maybe a lamp with a shade in a warm color).  If you are south- or west-facing, the Reveal lights and cooler lighting hardware might be a good choice.  Also, in the past I had shied away from CFL bulbs due to their cost.  Now I look at it more as a convenience and an investment; the bulbs generally last 5-9 years, so less money spent overall, plus fewer trips to the store for replacements!  A few additional money- and energy-saving tips include:

Need additional inspiration for changing out your bulbs?  Visit the GELighting website and their Facebook and Twitter pages.  I also have a GE Lighting Pinterest board where you can see how other bloggers are making over their lighting and saving, too.  And check out the cute commercial below to see how the savings can add up.

And here’s the coupon for you that I mentioned above.  $2 off each package can really lower the price!

I am a member of the Collective Bias™ Social Fabric® Community.  This shop has been compensated as part of a social shopper insights study for Collective Bias™ and GE. #CBias #SocialFabric  All opinions, as always, are 100% that of myself and my family.
0 Flares Twitter 0 Pin It Share 0 Facebook 0 StumbleUpon 0 0 Flares ×