I’m always looking for new ways to dress up chicken (isn’t everyone?), and so when I saw Chicken Piccata pop up on Pinterest the other day, I thought “Ooh.  Maybe?”.  Her post referenced a recipe from The Pioneer Woman, whom I adore, so (after reading the comments suggesting this particular modification was not exactly a win) I popped over to check out Ree’s original recipe.

As usual, I was not disappointed.  I did make a couple of swaps, myself, but that was mainly due to the ingredients I had on hand and not wanting to have to make a special trip to the grocery.  I also marinated my chicken for most of the day before cooking, just to impart some extra flavor.  Here’s my version of her recipe. 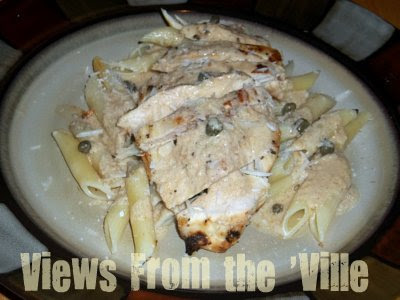 (Note: My husband said the chicken was perfect and the sauce delicious, but suggested maybe angelhair pasta next time.  That’s what Ree’s original recipe calls for, also, so I would suggest that.  It was still very tasty with the penne, though, so if that’s all you have on hand, go for it!)

5 Responses to “Need Dinner Inspiration? How About A Chicken Piccata Recipe”