The weather is turning a little colder so we’re starting to make some heartier meals like soups/stews, chili, casseroles and crock pot meals.  And now that Baby C. can be partially entertained in her high chair for a few minutes if I pull her close to me in the kitchen, it’s giving me some extra time to try new things.  So tonight we tried an enchilada casserole recipe that a friend gave me a bit ago.

My friend found the recipe in an issue of  Taste of Home magazine and said that it had been voted #1 Casserole of 2010.  I did make a few minor changes to suit our tastes; you can definitely do the same.  And while I am sharing a photo of the final result, I will be honest: this is not a pretty, photos-well kind of dish.  It’s bubbly and gooey and cheesy, so please forgive the quality of the image. 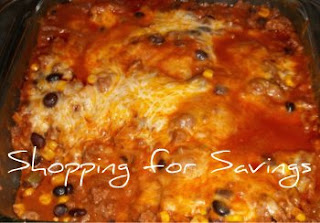 Mine turned out a bit more runny than I had expected.  Next time I will probably use a “chunky” salsa to reduce some of the liquid.  Also, I only used 2 tortillas because that’s what was listed in the recipe.  But I suggested 4 in my above ingredient list.  Hubby suggested that it could use more tortilla layers and also I think additional tortillas would give it extra stability and soak up a little extra liquid.

What is your favorite casserole recipe?