This post on summer treats is sponsored by Global Influence. All words and opinions are my own.

For some people, hearing the jingly music of an ice cream truck rolling down their street is the epitome of summer.  That’s not a memory I can really share.  Growing up in a rural part of Maine, there were no ice cream trucks that came door to door.

There were a handful of times, however, that I recall being able to partake in that particular rite of passage.  When we would go camping there would sometimes be an ice cream truck that would come rolling around in the evenings.  Once you heard the music, you just hoped you had enough time to scrounge up some change for tasty summer treats before they passed by. 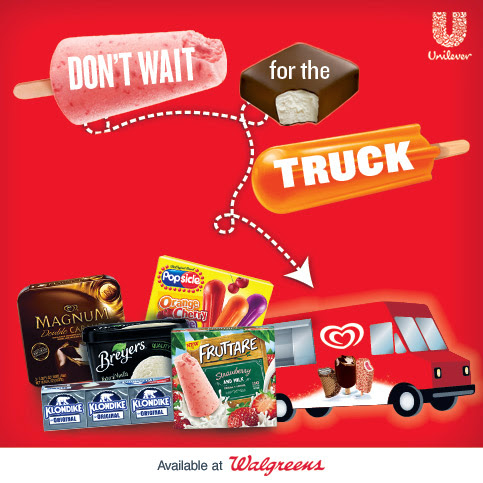 Not too long ago, I heard an ice cream truck coming down our street.  I nearly flung myself out the door, because I thought it would be fun to Bubbles to have her first summer treats from an ice cream truck.  Unfortunately, this particular vehicle didn’t move at the crawl I remembered; it more zoomed up the street and was gone before I could even reach the front door.

Fortunately, there’s really no need to potentially break your leg as you leap over your kids’ toys to try and wave down the driver.  Walgreens has your summer treats hookup in the form of Unilever ice cream brands.  These brands include some of our family’s favorites, like Magnum, Breyers, Klondike, Frutare, and Popsicle.

And really, what’s summer without a Klondike bar or a Popsicle Bomb Pop?

What are your favorite Unilever summer treats?