I received a copy of The Little Mermaid 2 and Ariel’s Beginning 2-Movie Collection in order to facilitate my review. No additional compensation was received and all thoughts and words are my own.

The Little Mermaid has always been one of my favorite Disney movies.  The songs, the colors, the under the sea adventure, the romance – it’s the whole package.  I did always wonder, though, about the origins of the kingdom of Atlantica and what Ariel and all her siblings were like when they were little.

I also wondered about what happened with Ariel and Eric after they were married.  Was it truly a happily ever after story?  Did Ariel regret giving up her fins and family for a set of legs and love? 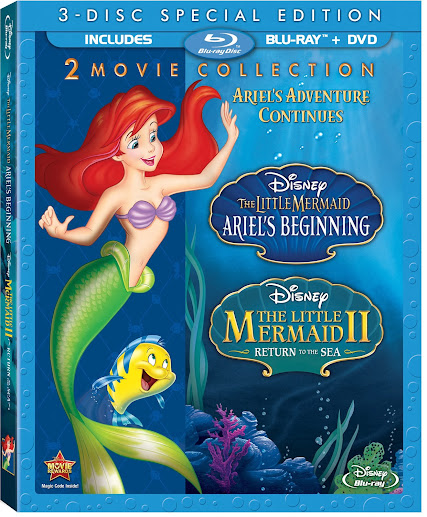 To answer those questions, a few years ago Disney released both Ariel’s Beginning and The Little Mermaid 2.  I didn’t have the chance at the time to pick up either copy but now that both are available in one collection, I knew it was time to add them to my library.  Especially because Bubbles enjoys The Little Mermaid, also, and these would be something we could watch together.

In Ariel’s Beginning, Atlantica looks much different than the Atlantic we know from The Little Mermaid.  Queen Athena has passed away and King Triton has banned all music, as it reminds him too much of his wife.  Ariel and her sisters are bored with their ho-hum lives and lack-luster relationship with their father.

Ariel bumps into a familiar face – Flounder the fish.  He introduces her to the Catfish, an underground music club where the Caribbean jazz is sizzling.  Another familiar face is found here – Sebastian the Crab, King Triton’s Chief of Staff, is the soloist!  (Can you imagine, uptight Sebastian?)  The music hits a sour note when King Triton finds out about the club.  They say music can soothe the soul, and Ariel is hoping that between her own pleas and the amazing music, they can soften the King’s heart once again.

In The Little Mermaid 2, Ariel and Prince Eric have had a daughter.  Melody, who looks very much like her father with jet-black hair, and who has inherited her mother’s curiosity.  She doesn’t know about her mother’s watery beginnings, and because of the evil Morgana, Ursula’s sister, her parents intended for it to stay that way.

Curiosity is a strong force, though, and Melody wants to know more about her past.  She secretly spends time playing in the ocean with Sebastian and Scuttle, where Morgana ultimately finds her and tells her about her mother’s life as a mermaid.  Melody starts to have the opposite dream of her mother: she wants to say goodbye to life on land in exchange for a life under the sea.

This plays perfectly into Morgana’s plans of stealing control of the Seven Seas, and she grants Melody her wish.  This sends Ariel back to the sea to save Melody and reunite their family.  Just like any mom of a rebellious daughter, right?

The Little Mermaid 2 and Ariel’s Beginning 2-Movie Collection is perfect for any Disney fan, but especially those who loved the original The Little Mermaid movie.  You can pick a copy up from Amazon, Target, or other retailers.

What did you think of The Little Mermaid 2 or Ariel’s Beginning?