Did you see Delivery Man this weekend?  If so, I’d love to hear your thoughts in the comments below!  I had a chance to attend the Delivery Man red carpet premiere and I can honestly say I was such a fan of the movie (you can read my Delivery Man review to get my thoughts). 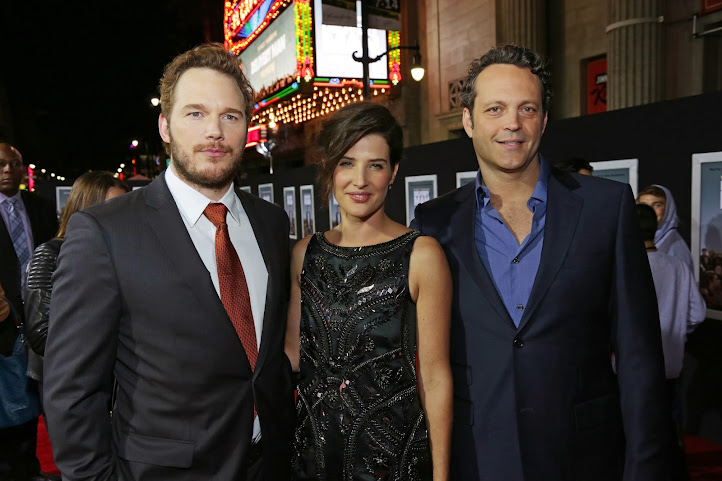 While we were in L.A. we interviewed Vince Vaughn.  We also had the chance to interview Cobie Smulders (Emma) and Chris Pratt (Brett) from the movie, too!  I was pretty excited that we were going to be speaking to both of them together.

Cobie arrived just a bit ahead of Chris; he was stuck in traffic and ran a couple minutes behind.  She came right in, though, asking how everyone was, and where we were from.  I’ve always loved Cobie on “How I Met Your Mother” and while I know that’s a role, I had wondered if she’d be as girl-next-door, let’s-hang-out as she seems on TV.  And she totally was.  Honestly, she gave off that vibe that, had there not been a big red carpet premiere we were all heading to, that maybe we should all go out to eat together. 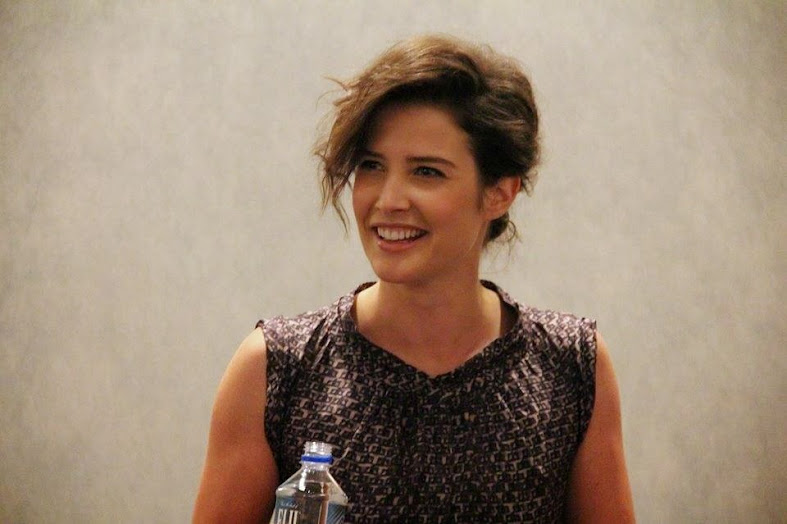 In Delivery Man, Cobie plays Emma, David’s (Vince Vaughn) girlfriend, who finds out that she’s pregnant.  As a relatively new mom, herself, we asked Cobie how being a mom influenced the way she played the role.  She had just started to respond, “Very much!  It’s all about what it takes to be a parent so I automatically connected with that at the same time…” when Chris walked in.

She paused, caught him up, and continued, “I had the fake belly on and I remember just the crazy emotions that come into play when you’re pregnant.  I think that one of the things that I know I crave and I think pregnant women do crave is stability.  You’re in this situation where – especially if it’s your first child – a lot of things are unknown.  In terms of the movie, the character of Emma, she has a very unreliable partner, so she’s just sort of trying to figure all that out.” 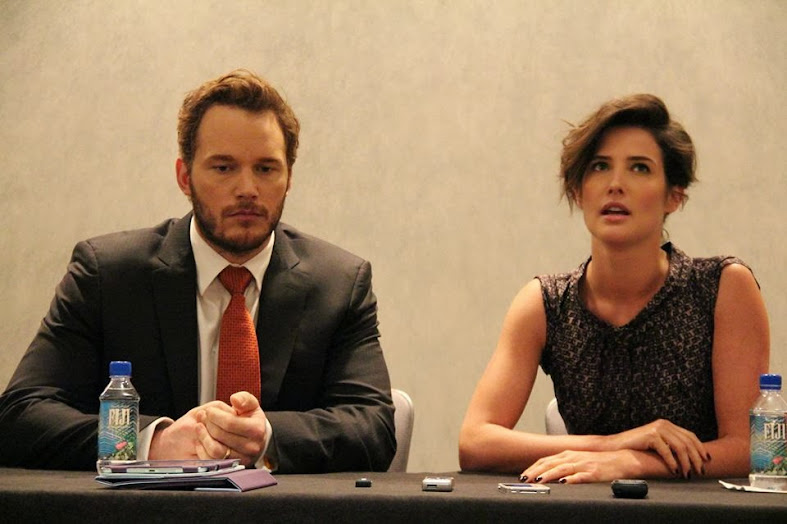 Cobie turned to Brett and asked him to share his thoughts – on being a dad, not a mom, that is.  “Well, for me, my son had just been born when I was doing this movie.  I think he was maybe 2 months old.  So for me, I wasn’t necessarily able to relate to my character’s journey as a father in this movie because he’s so overwhelmed with the idea of being a father.  I was still finding every little tiny thing endlessly fascinating about my own son.” 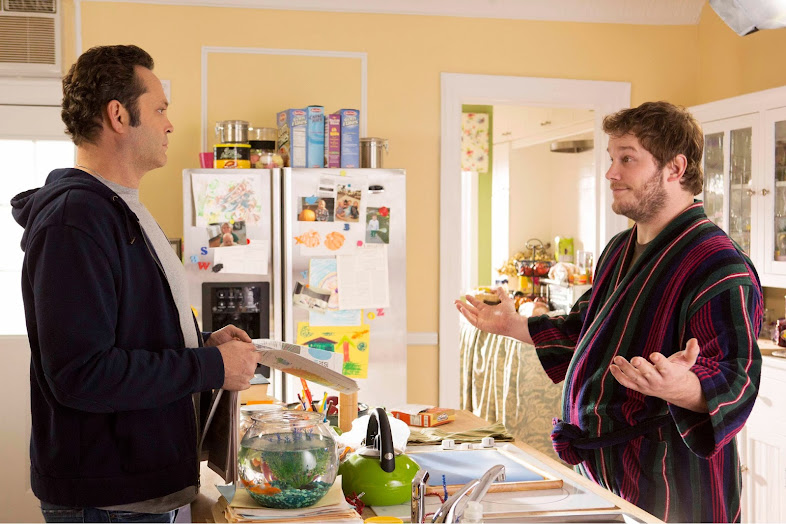 While Cobie wore a fake belly for her pregnancy role, Chris went old-school and just gained the weight required for the role – a total of 70 pounds.  So how did he do it?  “Well, really I applied all the principals of losing weight, and just reversed them.  I had just come off from a movie [Zero Dark Thirty] where I had gotten in good shape.  I just crash-dieted and worked out and starved myself until I was skinny.”

“So by the time I was done with that movie my body was really ready to gain weight, rapidly.  My wife was in the last third of her pregnancy and so a good 20 pounds of that was probably just sympathy weight and gaining weight alongside her as we indulged in things that we don’t normally eat.  The actor who played my role in the original [Starbuck] was really a brilliant actor, and part of the charm was that he was a bit of a bigger guy.  I’ve [gained weight for a role] before once and I really wanted to do it again and see if I could really push it this time.  And I did.” 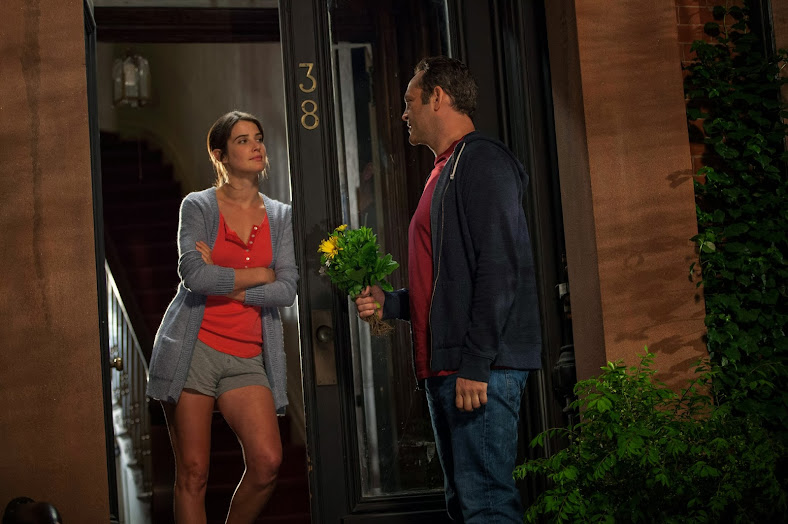 Curious what their favorite scene was?  So were we.  For Cobie, “I had this great scene with Vince at the end of the film, this very long scene where he goes into a speech, proposing, and then things start unraveling.  That was a really great scene to shoot because it was just this monologue, this never-ending monologue and Vince just did a great job with it.  For me, it was very fun to play off of, not only just as an actor but the circumstances being I just delivered a baby and so there’s a lot going on.  It was a fun thing to play.”

A Real Examination of Humanity 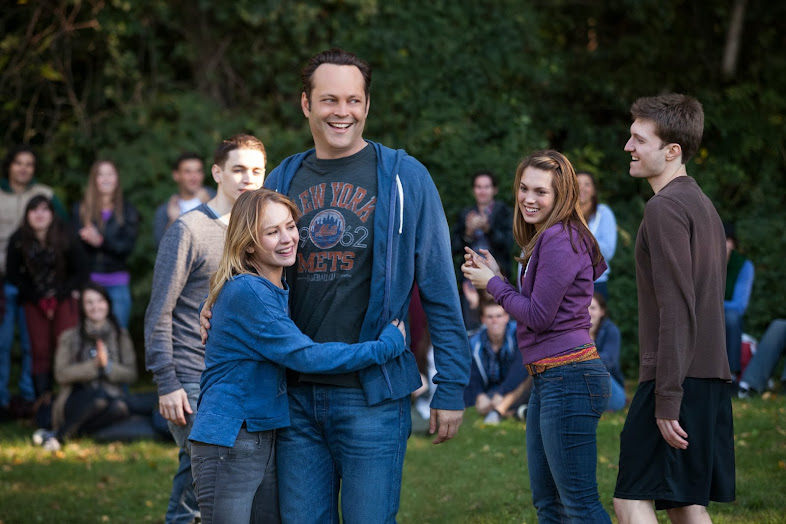 The conversation shifted focus slightly, and Chris shared with us why he loved the movie, overall.  “I was really moved by the way that Vince’s character, David, chose to connect for the first time with his children that were his biologically.  I really love the way [director] Ken [Scott] wrote these scenes.  It could go really broad, but instead it went to real places…some of them are crazy, like a professional NBA player.”

“Then all of a sudden you’ve got a kid who has needed assistance his entire life and lives in an assisted living home.  And there’s a girl who has chemical dependency issues.  These themes and these realities make it a real examination of humanity versus see how silly you could play out the outlandish part of this.”

If you haven’t seen the movie yet, you really do need to.  This isn’t a laugh-a-minute film, but there’s plenty of laughter to go along with a whole lot of heart.  And be sure to keep up with Cobie Smulders on Twitter and Chris Pratt on Twitter, as they both have upcoming Marvel roles – Chris in Guardians of the Galaxy and Cobie (according to imbd.com) in Avengers 2 – that you’ll want to know about!

Have you seen Delivery Man?  What was your favorite scene with either Chris Pratt or Cobie Smulders?