I’m a Superior Source Brand Ambassador.  I received products and compensation, however all words and opinions are 100% my own.  I am not a doctor and make no health or diagnosis claims.

I’ve been taking B12 in vitamin format for about 6 years now.  My doctor at the time gave me a B12 injection when she noticed my numbers were low, and it gave me so much extra energy that I decided to keep taking it.  I’ve always taken the sublingual version; it’s just so much more convenient than swallowing a pill.

So when Superior Source approached me about partnering with them as a Brand Ambassador, I thought it was a great fit.  They’ve been providing MicroLingual vitamins and supplements for over 40 years.  Even smaller than a sublingual option, MicroLingual tablets are soft molded instant release tablets that are held under the tongue.  And when I say smaller – I mean a lot smaller.  These tiny tablets are approximately 1/10 the size and weight of an equivalent standard swallowed tablet. 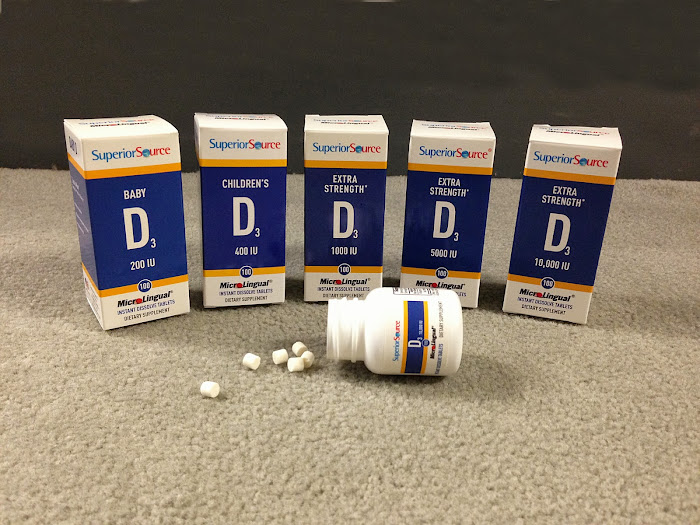 This month we received a variety of Vitamin D MicroLingual products, including:

It was serendipitous that they chose Vitamin D as our first supply to receive.  Awhile back my doctor also suggested I start taking Vitamin D.  I was surprised; no doctor had ever mentioned that particular supplement to me before.  But in speaking to friends and family, I found that a lot of them were being encouraged to get more of the “sunshine vitamin”.

My doctor had suggested that I take 50,000 IU per week, so I’m taking the Adult Extra Strength D 10,000 IU Monday through Friday.  I really love how tiny they are; you can barely even feel that it’s there.  And it dissolves really quickly with no aftertaste at all.

In hindsight, I guess I shouldn’t have been all that surprised.  Bubbles’ pediatrician advised that we start giving her Vitamin D from around six months old until she started drinking solely Vitamin D-fortified milk.  At the time I just figured babies needed the extra for their development, but apparently it’s not just them.  In fact the American Academy of Pediatrics recently made changes to their previous recommendations.

For children, the American Academy of Pediatrics (http://www.aap.org/) recently doubled the amount of
Vitamin D recommended for infancy through teen years, suggesting 400 IU for breastfed newborns in the first few days of life, followed by a maintenance dose of 200 IU for infants up to two months old. Infants and children who do not get 400 IU per day from food, would benefit from supplementation that brings them up to that level. This protocol can support bone health and development along with promoting a healthy immune system response.

Vitamin D is needed by both children and adults.  The two things I’ve heard it linked to in the past are maintaining a stable mood and supporting bone health and muscle tone.  Additionally, though, it’s also known to enhance immune system response; helps with the absorption of phosphorus, which supports metabolism and energy; and maintaining already-normal healthy blood glucose and blood pressure levels.  It’s especially important as we age and natural hormone levels decline.

The folks at Superior Source are so confident in their products that they are willing to let you all try it for free!  Just head over and “like” them on Facebook and receive a free 60-day supply of Vitamin D product of your choice (just pay $4.95 shipping). 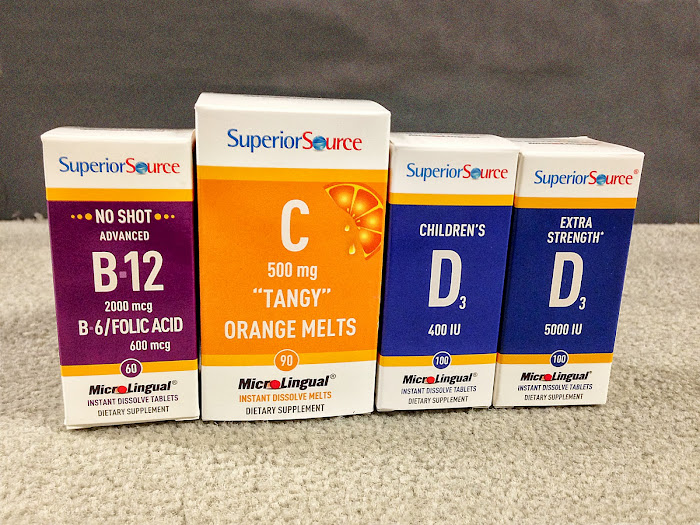 They’ve also graciously offered to send three of you an awesome prize pack.  In addition to the Children’s Vitamin D and the Adult Extra Strength Vitamin D 5,000 IU you’ll receive B12 2,000 mcg and Vitamin C 500 mg “Tangy” Orange Melts.  To win fill out the Rafflecopter form below.  Giveaway is open to US residents ages 18+ at the time of entry and will close at midnight EST on October 16th.  Good luck!

Which Superior Source product would you most like to try?