Midsomer Murders has been around for a long time – it’s actually been airing since 1997 – but I only recently discovered it.  It’s a detective drama series set in the fictional English county of Midsomer.  The main character is Detective Chief Inspector (DCI) John Barnaby.  He’s the younger cousin of the former DCI Tom Barnaby.  Barnaby spends his time solving the multiple murders that take place in Midsomer.

I started watching towards the end of the series – Midsomer Murders, Set 22 to be exact.  The original air date for these four episodes was in 2011, and there have been at least six additional episodes since then (apparently, their seasons are much shorter for BBC shows than for American cable shows).  These four were definitely enough to prompt me to go back and watch the series from the start, though. 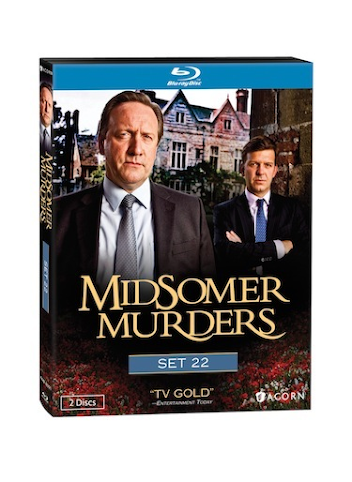 The episodes from Midsomer Murders, Set 22 include:

Do you watch British TV shows?  Have you watched Midsomer Murders?