We received an Aeromax Astronaut Space Pack Super Soaking Water Blaster in order to facilitate our review.  All words and opinions are my own.

We’re coming into the last of the dog days of summer and, at least around here, they are making quite the impression.  The temperatures in the mid- to high-90s for the past few days, and when you walk outside you feel like you’ve accidentally stepped into a sauna.  It’s not really stay-outside-and-play-all-day weather, which isn’t easy to explain to a toddler. 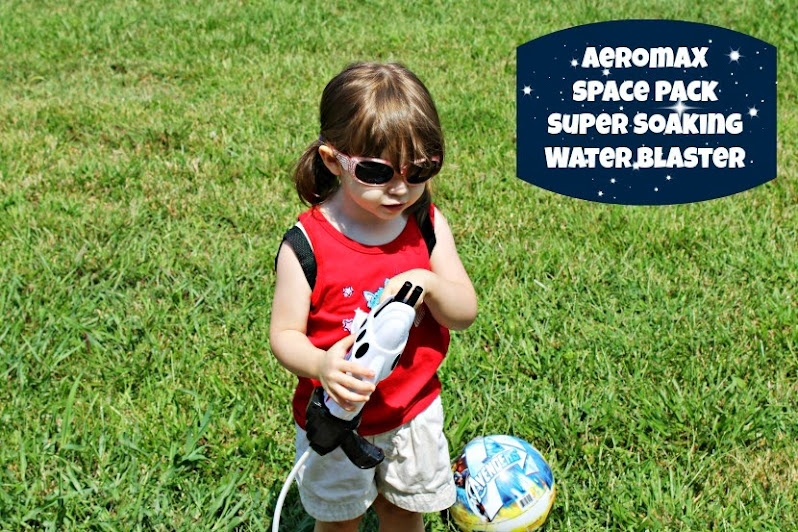 When we do get outside we look for ways to stay cool while having fun.  There’s been a lot of splash time in Bubbles’ pool and even some good ol’ fashioned spraying of the hose.  And recently there has been some fun with the Aeromax Astronaut Space Pack Super Soaking Water Blaster.

What I like about the Water Blaster (we’re going to call it that, as “Aeromax Astronaut Space Pack Super Soaking Water Blaster” may be the longest toy name in history) is that it’s themed.  It’s designed to look like an astronaut’s space pack, so aside from just using it to run around and soak family members and friends, they’ll have an accessory for imaginative play.  Even after it’s drained and the warm days are behind us, it can be used in the house to help little spacemen explore remote planets. Another thing I like is that the Water Blaster holds a liter of water in it’s tank.  That means less stop-and-go play, having to reload the blaster every minute or two when the water runs out.  It can produce a 30-foot blast of water and the dual-nozzle can be controlled to produce either a single, straight-on stream or to spray on two different directions at the same time.

I do wish it was a little easier to thread the hose into the bottom of the pack.  It can be a little tricky getting a good seat, causing a few leaks.  Other than that, though, we didn’t have any problems with the design.  The straps are adjustable and help distribute the weight of the water across little shoulders.  And all the decals seem to be attached well, not likely to peel off after a few sessions of water play.

Who in your family would love playing with an Aeromax Astronaut Space Pack?