Thank you to Disney for providing us with a great Doc McStuffins DVD.

If you have a toddler the words “time for your checkup” probably cause involuntary humming and perhaps head-bobbing.  In fact, just thinking about those words right now has the Doc McStuffins theme song running through my head.  Bubbles is taking a nap right now, otherwise if she heard me hum it out loud, she’d be begging to watch the new Disney Junior “Time For Your Check Up” DVD (available today!).  That would be fine by me, because I have to admit to being quite the Doc fan, myself. 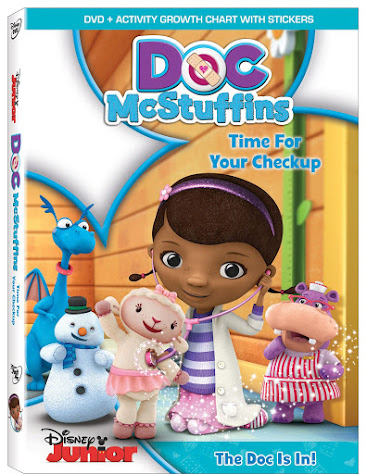 The new “Doc McStuffins: Time For Your Check Up” DVD has five episodes (though each episode is made up of two shorter episodes, so it’s really like 10) and has a run time of 120 minutes.  The episodes include:

The Arcade Escapade / Starry, Starry Night episode is one we’ve seen a few times on TV and it’s one of my personal favorites.  In Arcade Escapade Doc visits and arcade and finds a toy giraffe named Gaby stuck in one of those “claw” machines.  She never gets chosen because she has a torn leg, so Doc and her stuffed pals figure out a way to help her.  It’s a great lesson on teamwork.  And in Starry, Starry Night a little star-gazing planned, but no one is able to see anything through the telescope.  Apparently Aurora, the telescope, is having some issues with blurry vision.

Bronto Boo-Boos / Brontosaurus Breath is one of the newest Doc McStuffins episodes; it aired for the first time this month.  I love the “mystery pox” and how they track down from where it’s coming.  It’s one thing I really enjoy about the Doc McStuffins show, in general; she shows that it’s perfectly okay to be a smart girl. 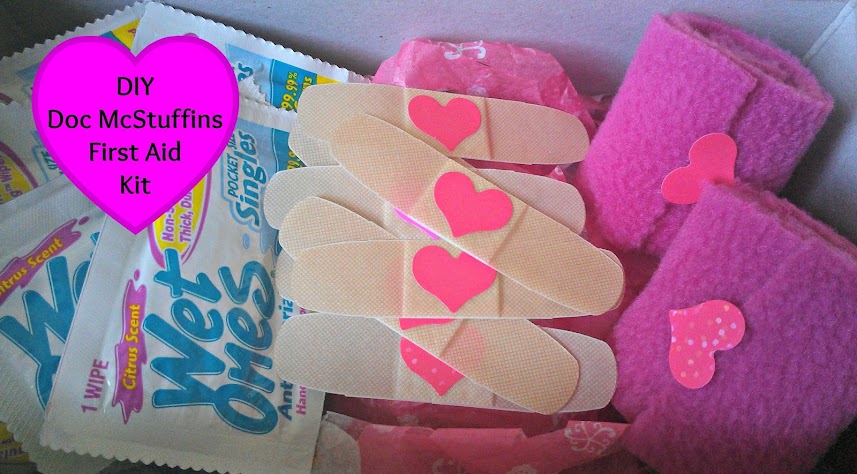 Bubbles loves playing with her Doc McStuffins check up kit, but doctors don’t always have their full set of supplies with them.  So to compliment the full check up kit, I made a quick little DIY First Aid Kit for her.  It was super easy to make and she has really enjoyed playing with it.  All I did was to add some heart-shaped stickers to some plain band aids, cut up some strips of pink felt I had left over from a craft project and fasten them with heart stickers, and then use individual wet wipes as antibacterial swabs.  When I get the chance I’ll pick up some sparkly purple material and wrap a little shoe box to make it extra-fun.

Which episode of “Doc McStuffins: Time For Your Check Up” is your favorite?