So last week I re-started my Nutrisystem plan after receiving my 3rd shipment of food.  Previously, I had tried to order one to three of each item so that I could really sample all the offerings.  For this shipment, I decided to go with my favorites and ordered multiples of two to five foods for each meal.

You choose a total of 28 breakfasts, 28 lunches, etc., so I was ordering an average of five or six of each food.  For some, that may seem a little boring, but as I wanted to ensure I was making re-entry as easy as possible for myself, I wanted to know I had foods that I was going to love.

I’m glad I made that decision, as it really did make starting back up a snap.  Breakfasts last week were either a cinnamon bun or the wheat bagel. 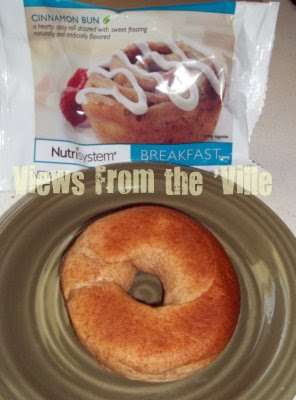 Speaking of the bagel, let me take a moment to say something about portion sizes.  I know portion sizes have grown.  I’ve witnessed it myself through the years at different restaurants, and you also hear about it in the media and casual conversation.  But when I compared the Nutrisystem bagel to one of the ones we had purchased the week before, it sort of blew my mind.  The Nutrisystem bagel wasn’t quite the size of one-half the store-bought bagel.

This isn’t to say the Nutrisystem portions are too small (they’re not, I haven’t been hungry yet on this plan), it just was an excellent visual to remind me that even when you’re thinking to yourself “oh, I was good today, I had a whole wheat bagel for breakfast”, that the bagel could really have been the equivalent of two breakfasts.

The only aspect of the plan that’s been a little “off” for me is the protein shake.  They’re actually quite tasty, but you’re supposed to have it with breakfast.  Bubbles is a very light sleeper, so shaking a cup full of ice with the mixer ball rattling around inside in the mornings really isn’t feasible.  I try and remember to then have it after she gets up as my first snack of the day, but I don’t always remember.  I’m still trying to work that part out.

I also didn’t get much physical activity in last week, but that’s because after being sliced up for surgery, even sneezing made my stitches hurt.  I’m feeling much better this week, so hope for that to be a non-issue going forward.

Remember, my goal for the month is seven pounds, so I’m well on my way to meeting it!

Are you currently following a health plan?  I’d love to hear how you’re doing!  And if you have any tips/tricks/suggestions – bring ’em on.

Want to lose weight and get healthy on Nutrisystem? Join today by calling 1-888-853-4689 or by visiting http://www.nutrisystem.com/nsblog