One of the first items that we purchased before Baby C. was born was her swing.  We did a lot of research online; I think I even sent out some tweets for recommendations.  After sifting through dozens of swings and hundreds of online reviews we ended up purchasing the Fisher-Price My Little Snugabunny Cradle ‘n Swing. 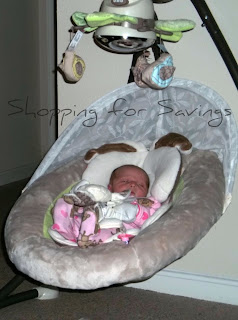 I was a little taken aback by the price (this would not be the last time that feeling hit me) but since the reviews for it were so overwhelmingly positive and because my husband (who had the prior experience) said that a good swing is key.

(He was right about that but please don’t tell him I said so.)

The swing is awesome, and here’s why I think so.

The swing runs on batteries or electricity.  This is one of the few swings out there that has the plug-in option and it definitely has been a money-saving feature.  It’s nice to know that if the power went out we could throw in 4D batteries to keep it going but we haven’t had to use batteries in it at all.

It has three swinging positions.  The swing has the traditional front-facing position but it also has two other positions: the baby’s feet pointing to the left and the baby’s feet pointing to the right (to me this is sort of the same position, but hey).  It is very easy to change between the positions; you just hold down a wide button on the top of the swing and turn the seat.  You can even do it while the swing is in motion.  For the first few months Baby C. mostly liked it in the front-facing position.  As she’s gotten older, she likes the side-facing position with her feet pointing right (we think one reason is she can watch the shadows it makes on the wall as she swings). It has multiple sound options and a volume control.  Having multiple musical and sound effect options (this one has different lullabies and jungle sounds) is a must.  Not only because sometimes she’s in the mood for different sounds but also because hearing an instrumental version of “Lullaby, And Goodnight” over and over for months in a row could potentially make you throw it out the window.

There is a mirror and attached motorized mobile with flying birdies.  Baby C. loved to look up and watch the birds fly and to see herself in the mirror.  It easily kept her entertained without it having to be flashy. The lining of the swing is the softest thing ever.  Fisher-Price may have technicians out there who have figured out how to cross a cloud with cashmere.  Baby C. turns her face and rubs her cheek against it whenever we sit her in it. Setup is painless.  I read the directions and pointed out the pieces and my husband put it together.  Probably took us 30 minutes and there was no cursing, throwing of tools or – best of all – leftover parts.

There are no “didn’t likes” with this swing.  There was one thing that both my husband and I thought would be a nice addition and that’s a continuous play button.  The mobile and music have an auto-off feature after about 15 minutes.  Baby C. is a light – really light – sleeper and sometimes she would wake up when the music stopped.

Literally everyone that has seen the swing says “Man, I wish they made that in adult size”.  It really does look like the perfect place to curl up for a nap.  Don’t you agree? 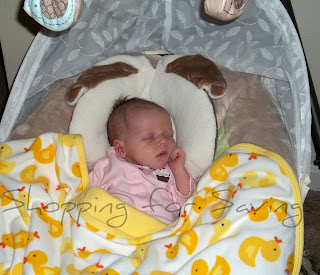 You can buy it multiple places, but the cheapest we found it was through Amazon, currently on sale for $130.

I received no product or compensation for this post; we just love this swing and I wanted to share it with you.